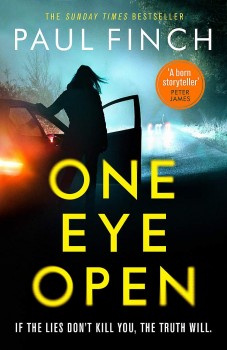 A car is found crashed deeply into trees off the A12. The two passengers may not survive. The car has fake plates and numbers and holds a large amount of cash but there are no signs as to who the occupants are.

DS Lynda Hagen is called to investigate a crash on the A12. The car has driven off the road at high speed, destroying the barrier and smashing into a tree deep in woodland adjacent to the road. The two occupants are just clinging on to life. They have no ID at all. Their car has false number plates and is shown to be a chop shop car.

The investigation leads to their identification and the gradual unpacking of the incidents that led up to the accident, with an increasing cast of characters and events. Hagen, once a successful and promotable police officer, scaled back in order to look after her children while her husband pursued a higher-octane police career.

Unfortunately, her husband is now retired after a traumatic incident and is unsuccessfully trying a career in writing about his time in the force. Now Hagen is a traffic cop and the investigation rapidly moves beyond her realm of responsibility. But she’s obsessed with finding the answers, so she refuses to let go which puts her in conflict with her superiors.

The story is cleverly written in two timescales. There are alternating chapters with the police investigation juxtaposed with others that show the background story of the car’s two passengers and the complex series of events that led to the accident.

I was very impressed with this book. The characters are deftly presented, and they are all believable, often very unlikeable, with enough about them to make the main protagonists definitely three-dimensional. The pace is just right, the plot is interesting and not predictable, and the settings are very visible as are the climate, the buildings, and the criminal world. It seems a strange thing to say but the book is very comforting in its skillfulness. I was led on a thoroughly enjoyable, though by no means comfortable, journey as the story develops. It is very satisfying to be constantly impressed with no feeling of irritation or being let down by inconsistencies or cliche.

The ending is particularly strong. I really enjoyed One Eye Open and am hopeful that it will appear as a first-rate drama on the screen sometime soon.