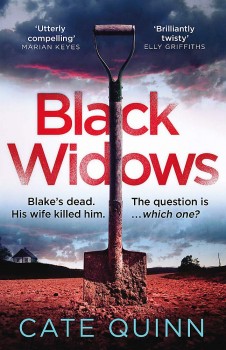 Blake Nelson is dead, and the police must ignore the lies and their own prejudices if they are to find out who killed him.

Blake Nelson bought and built his home on a stretch of land in the Utah wilderness. He had his reasons for choosing to settle deep in the beautiful yet savage isolation. In fact, he had three reason: Rachel, Tina and Emily. Because, despite the heavy presence of the Church of the Latter-Day Saints in Utah, Blake’s unconventional behaviour was shunned by most.
Three wives are two too many. Polygamy had been renounced over 120 years before. Rachel, his first wife, obedient and extremely devoted, has only one fault; although she never lies, she rarely expands on the bare minimum, including divulging information about her past. Tina is the rebellious wife, and the polar opposite to Rachel. Blake had ‘married’ her straight from rehab, lifting her from her murky Vegas life. Emily is the youngest wife, naïve, scared, and a compulsive liar, estranged from her Catholic family.
They only had Blake in common. Now they share something else. Their husband has been found dead under the desert sun and, one by one, all three are accused of his murder. Despite their differences, they cannot survive the bigoted investigation without trust, particularly when rumours creep out of the woodwork about a fourth wife.
I didn’t want to like this book. I couldn’t have cared less that a man who had taken three wives had been murdered. Particularly as in the first part of the story, the author paints him as an unpleasant man without any redeeming features.
But this story got under my skin. The teasingly short chapters and compelling characters always drew me back, digging in their nails until I was glued to the book, devouring the pages.
Black Widows is tense. It treats us to an insight of an unconventional family and the secrets each one of them carries. Secrets that cause the women to suspect one another and root for each other in equal measures. Cate Quinn gives each of the three ‘sister-wives’ a unique voice, a disparate past, and a distinctive view on their marriage that makes them all fascinating and, at times, unexpected.
The story is slow, perhaps too slow for some in the first half. But it simmers without feeling as if there are reams of fluff and padding. It took me to another world, one where at times I had difficulty remembering that the main characters are young, and the setting is today. It is a subtle but eloquent lesson in an oft ignored or derided religion. The author plays with the reader’s loyalties, making them question beliefs and the ‘normal moral code.’ The whole thing is fascinating and evocative.
That said, it should come with a health warning for those who are sensitive as it portrays cult lifestyle, child abuse, misogyny, and sexual exploitation in full colour.
The story twists and turns, as any memorable journey should. And even though I was certain early on who killed Blake, and even though at times I found the story had an element of chaos in its writing, it did not detract from the pleasure of reading this book.