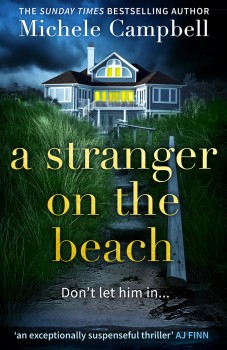 A Stranger on the Beach

Caroline already regrets her revenge one-night stand, because Aidan can’t or won’t accept the idea of one night.

Caroline and Jason Stark are the epitome of success. They have a clever daughter in college, an apartment in Manhattan, and have just finished building a coastal home an hour’s drive outside the city. To ice the cake, they are about to have a housewarming that Caroline wants to be the talk of the town.
Caroline and Jason are fake. Their daughter is a daddy’s girl who even prefers her aunt to her mother; Jason is not where he should be, certainly not at their Manhattan apartment; and the house they have just built has stretched their finances to breaking point.
But one thing is true. They are about to have a housewarming party that really will be the talk of the town.
Then there is Aidan Callahan, young, sexy, and attentive. Or obsessive, destructive, and more than a little dangerous, particularly when Caroline casts him off after a window-steaming no-inhibitions night.
Caroline has been stupid and already regrets her indiscretion. But she rationalises and makes excuses – after all, she was reeling emotionally from finding out Jason is a lying cheat. It’s a shame Aidan, with a criminal record and a loaded gun, doesn’t see it like that.
This story has, for the main part, two points of view, primarily Caroline’s and Aidan’s. And they are both unreliable narrators that leave the reader to work out who is the least unreliable.
Unfortunately, they are uninteresting, despite their unreliability. Caroline’s character lacks fine-tuning, and Aidan is overtly unlikeable in a Walt Disney villain way. Although I felt sorry for Caroline’s humiliation when her husband arrived at their housewarming party with his bit on the side in tow, I couldn’t connect with her, even when she was heading for a whole heap of danger, despite the author cleverly putting her point of view in the first person. Perhaps it is because rather than sensing her as unreliable, I had the distinct feeling the author was outright lying to me.
Neither did I understand hers or other characters’ decisions and behaviour. Rather than the twists or plot blindsiding me, it was the characters’ flimsy and in places non-existent reasoning for their out-of-character actions that made me blink rapidly.
Aidan needs grounding. He acts out like a petulant child rather than a scary stalker, and he does rather overdo retelling the reader about his previous crime. It is not as if the offence is easily forgettable, because it was murder – not shoplifting or breaking the speed limit on his moped.
That Caroline and Aidan’s versions of events are so different from one another’s is not a problem, but it does end up with a large amount of repetition. This causes a significant sag in the pacing and vibrancy in the middle section. And the execution of the disparate viewpoints does feel as if the author is forcing bias on the reader.
The final section of the book turns into a police procedural, which smacks of a mimic of Gone Girl. But if the reader hasn’t worked out early on where the story is going, by this point there is no gasp-worthy surprise.
For all the above, the story is an uncomplicated read, and there are moments where tension is above sea level. This is an easy book to devour in one sitting.