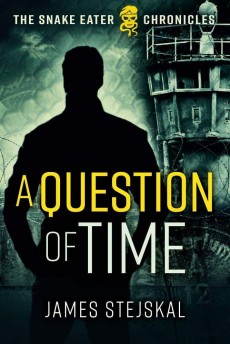 A Question of Time

Master Sergeant Kim Becker and his Special Forces ‘A’ Team are tasked to bring out a vital highly placed intelligence source from behind the Iron Curtain that divides 1979 Berlin.

Military historian and conflict archaeologist James Stejskal served 35 years with the 82nd Airborne, the US Army’s Special Forces and the Central Intelligence Agency in Vietnam, Europe, Africa, the Balkans, the Near and Far East before writing non-fiction.

Now the veteran former Warrant Officer, among the first in SF, has turned to fiction, launching The Snake Easter Chronicles, a boots on the ground drama series featuring the evolution and work of the Special Operations Groups against both traditional enemies and the emerging threat of European and Middle East terrorism.

This is fiction that reads like fact – faction at its best. Stejskal’s opener brushes away the myths of what it is like personally and institutionally to be involved in special missions or intel operations, and offers plenty of real-life drama, rich with details only an insider could offer. To avoid problems with government secrecy regulations he has adapted the real stories of operations he and the men and women he served with conducted, but what appears as fiction is firmly based in reality with plenty of supporting technical detail.

This heart-pumping tale of a Special Forces mission behind the Iron Curtain to save a vital espionage ‘asset’, a senior East German intelligence officer disenchanted with life under the Ulbricht regime, is set in Berlin during the dying years of Cold War in the internationally tense period after America’s long and ultimately unsuccessful war in Vietnam,

In an artful blending of the history of a real secret unit that combined the tradecraft of spies with the daring of a well-led Special Forces team, Stejskal introduces his readers to Master Sergeant Kim Becker and his Support Detachment Berlin Special Forces A Team. As they plan their dangerous mission, the East German officer they are sent to rescue, known only by his codename of Oz, struggles to avoid the attentions of the dreaded Stasi secret police, playing desperately for time in the hostile headquarters he and his small unit of helpers have so fully betrayed to the CIA.

Stejskal convincingly describes the mission’s build-up and progress in the face of endless problems, not least a notoriously trigger happy East German police and military. Even if the outcome is never in doubt, he does a good job building the suspense and followers of realistic espionage fiction will be delighted although they will almost certainly also be surprised at the lengths the Americans were willing to go to in this secret and often deadly war.