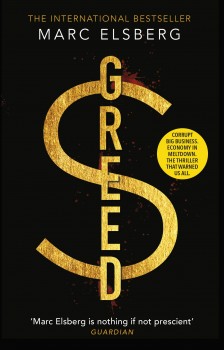 With the world on the brink of a new financial crisis, a Nobel prize-winning economist with a possible solution is murdered on his way to an international summit.

If you only buy one book this year, it should be Marc Elsberg’s prescient and frightening examination of society’s and the global community’s factionalisation, the ever-growing gap between rich and poor and its possible effect on our future.

The story – a horrifying mirror version of real life – deals with the dangers of unleashed capitalism in a present of the Covid-19 pandemic, a looming climate catastrophe and the ever-increasing need for international conflict management.

Based on the work of physicists and mathematicians at the London Mathematical Laboratory, this spine-chillingly realistic thriller on the horrors of freewheeling capitalism and human greed, shakes the foundations of western political and economic models – and offers potential mechanisms for a constructive solution.

This sometimes slightly fractured cross between a near Dan Brown-style chase and an eco-thriller, is designed to get intelligent readers who care about the future thinking, talking and perhaps even acting.

Set in the near, if not immediate future, the world economy is in freefall in a re-run of the financial crisis of 2008-09. Mass unemployment and hunger rage as banks, corporations and even whole countries go bankrupt. But in the face of disaster, one group – the super-rich –  are doing well, steadily increasing their wealth and power.

Nobel prize-winning economist Herbert Thompson is driving to an emergency summit in Berlin to deliver a radical solution – a formula that could reverse the slide, transform the worldwide economy, and give everyone a share of the wealth – when he is killed in an arranged car crash in the Tiergarten.

Young nurse Jan Wutte witnesses the crash and the subsequent actions of a group of men in a following vehicle and knows this was no accident. Muttered clues from the one immediate survivor, later burnt alive when the men fire the car, tell him where to look for help, but he is arrested by police at the scene.

Managing to escape while their attention is distracted by a spectacular demonstration by eco-activists targeting the summit, he works out the clues to first contact English former investment manager-turned-professional gambler Fitzroy Peel and later the beautiful Jeanne Dalli, a brilliant financier working for hedge funds run by one of the world’s richest and most ruthless men. The question is how far is this man – and others like him – are willing to go to achieve their aims and satisfy their greed.

This gripping, visionary and timely tale, hopefully minus its contract killers, could become fact literally around the corner. The trio set out to thwart the power grab, aided unwittingly by an intelligent, independent and determined woman police inspector as they work with the powerful, highly innovative and inventive – although occasionally violent – activists of the German Green movement,

Simon Pare must be given full credit for his sensitive and remarkably readable translation. Don’t be put off by all the economics and mathematics in the London Mathematical Laboratory’s hypothesis and Eslberg’s presentation of the dead Nobel laureate’s ideas. It is all really logical and well explained in a simple parable that almost anyone can follow – and in fact makes a great deal of sense if governments had the will to implement it.