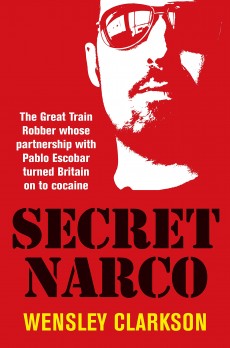 A new look at the life and death of Great Train Robber and career-criminal Charlie Wilson.

On April 23 1990, Great Train Robber and career criminal Charlie Wilson was murdered in the back garden of his Costa del Sol villa where he was preparing a wedding anniversary barbecue. He was the victim of a karate attack, then shot in the neck and mouth. He died in the arms of Pat, his wife of 35 years, as his killer escaped over the garden wall. Wilson was the man largely responsible for introducing the scourge of cheap cocaine into Britain in partnership with Columbian drugs lord Pablo Escobar.

The names of Bill ‘Skins’ Edmunds and Danny ‘Scarface’ Roff, known to work as a team, soon surfaced on the grapevine. It was believed by Wilson’s old south London gang that they carried out the hit on the orders of Amsterdam-based drugs runner Roy ‘The Lump’ Adkins.

Adkins’ Dutch partner Klaas ‘The Preacher’ Bruisma died in a hail of bullets on the steps of Amsterdam’s Hilton Hotel in 1991 and in 1993 London ‘businessman’ Donald Urquhart was shot in the street by a man on a motorbike – a classic South American-style assassination – as Wilson’s friends sought revenge in one of the deadliest feuds in British underworld history.

They drew the line at Escobar, a man so powerful he once offered to pay Colombia’s national debt, the narco-terrorist leader of the Medellin cartel and the wealthiest criminal in history, who monopolized the cocaine trade into the US and Europe.

Wensley Clarkson’s story covers five decades of London’s gangland and life on southern Spain’s Costa del Crime. The first part covers Wilson’s rise from a post-war Battersea tenement through increasingly well planned and dangerous crimes to become one of the leaders of the Great Train Robbery gang; his capture and sentence; his spectacular escape from Birmingham’s Winson Green prison; his subsequent recapture in small town Canada, and what he saw as his continuous repressive treatment by the establishment.

It’s mostly factual, but Clarkson’s attempt to boost his 30-year investigative career by insisting on anonymity and pseudonyms for many of his sources can only disappoint readers wanting the real story. Many are dead. Virtually all are identifiable to anyone knowing anything about south London crime or the Great Train Robbery. Others are hardly sources I would rely on to tell me it was dark at midnight!

The second part is even thinner. While Wilson was in Parkhurst, Durham and other prison he had made the occasional ‘score’ financing cannabis deals and VAT scams on gold imports. On his release, consistent attempts by a corrupt Flying Squad to stitch him up for fraud and armed robbery convinced him he could not stay in England.

Life in Spain had to be paid for. The gold racket and cannabis smuggling went so far, but the ambitious Wilson had become convinced that cocaine was the route which would take him to his dream of forever shaking off his childhood poverty and becoming Britain’s richest and most powerful criminal.

We may never know the full story of Charlie Wilson’s life and death. Despite its limitations, Secret Narco is as good a stab at it as we are likely to get. Wilson was driven, determined, superbly organised, personally brave and generous, a lover of good food and pretty women while at the same time a devoted father and husband. This is a story that underlines the adage that truth can indeed be stranger than fiction.