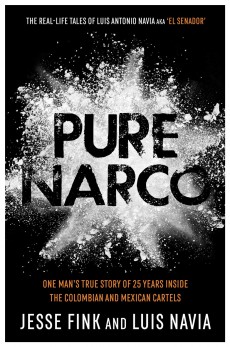 The autobiography of Luis Navia, who for 25 years organised shipments of cocaine from Colombia to US and Europe.

This book details the life of Luis Navia, largely in his own words or those close to him, as put together by writer Jesse Fink. Navia’s claim to fame is based mostly on his contact with some of the biggest names in the Columbian cocaine cartels, for whom he organised distribution to the USA and more recently to Europe.

Navia is somewhat unusual for someone in the trade in that he came from a well-off family. He was born in Cuba but moved with his family to Miami soon after Castro took power. Navia senior left Cuba with substantial resources and was a legitimate businessman; the family hobnobbed with Nixon and Kennedy, and Luis could have made a good living if he had put his undoubted business and organisational skills in a conventional direction.

However, Luis enjoyed the lifestyle that came with retailing cocaine and as soon as he had the contacts that made this possible, straight business never really appealed. What Luis really enjoyed was partying with hookers, drinking and snorting coke, and he seems to have pretty much devoted his life to that. The money came and went, and given the profits involved in moving coke Navia burned through impressive amounts, without ever accumulating much.

For a notoriously risky trade, Navia’s survival is testament to his instincts and to the ease with which he moved in different types of society, and his care not to offend powerful characters, several of whom were ready to kill on the slightest provocation. He was, of course, useful to producers in Colombia, but some of the instances mentioned show that it was necessary to be very sensitive at all times to the feelings of those of importance within the cartels.

The ease with which cocaine could be transported across national boundaries in the 1970s and 1980s made the generation of huge profits very easy, but it was inevitable that once US law enforcement got geared up things would be much harder. Despite a handful of false IDs and taking care to stay out of the USA, Navia was eventually arrested, although given the estimated 200 tons of cocaine that he is thought to have moved, the five years he received seems like nothing more than a smack on the wrist.

The book is unlikely to have any great appeal except perhaps to those with particular interest in the history of cocaine production and distribution, or stories of the bizarre characteristics of some of the narcotics barons. Navia himself is full of self-justification and indulgence for his own behaviour, with no sense of remorse or any shade of guilt for his participation in a trade that has meant misery for so many, as shallow a man as you might care to imagine.