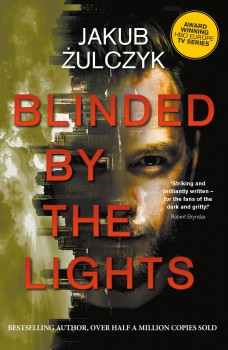 Blinded by the Lights

Kuba deals cocaine to the wealthy of Warsaw, affects a cool attitude, but under increasing stress plans an overseas holiday, if he can just make through one last week.

This book is narrated in the first person present by Kuba, who makes a substantial income in Warsaw from the sale of cocaine. His clientele are the rich, or the sons and daughters of the rich, with particular emphasis on media darlings.

Kuba reveals nothing of himself and cultivates an entirely undeserved reputation for being a gangster by being rude and unpleasant to most of his clients. Behind his air of mystery, however, there is nothing special about Kuba other than his disdain for more or less everyone he meets.

In Kuba’s view, ‘everything is about money.’ He regards people who buy his wares as phonies, wage slaves fooling themselves about their prospects. Warsaw is full of clubs for ‘people unable to face the idea of going home’, and Kuba despises all of them, weak people with self-indulgent fantasies.

Kuba endlessly sings his ‘dog song’, his endless complaint about how dreadful life is and how the majority of ‘wriggling microbes’ just want to live another day for pointless reasons. He sounds much like Mark Renton in Trainspotting.

Anyway, his way of life imposes plenty of stress, and Kuba has decided to get away from it all in Argentina; the action takes place over the week before his planned departure. For no particular reason, Kuba’s life starts to slide out of control. It begins when one of his high-profile TV star clients, stuffed with cocaine, knocks down and kills a pregnant woman. The client wilts under police pressure to name his supplier.

Someone bails him out, but it is not his wholesaler, as he had expected. He also is asked to hold some cash and drugs, the ownership of which is unclear, and this is stolen. Things deteriorate when his secret flat containing the bulk of his savings is burgled.

As the problems mount up, Kuba’s normal abstention from cocaine and alcohol is abandoned, he gets very little sleep and gets beaten up fairly regularly. When he does doze off for short periods he is haunted by disturbing dreams where familiar characters turn up in strange guises.

Kuba’s logic becomes somewhat distorted but he is sustained by his firm belief that within a few days he will be sitting in relaxed luxury in an Argentinian hotel. Unfortunately, he has been inattentive to what is going on around him and life is catching up.

Nearly 450 pages of nihilist moaning is a lot to take, and some readers will find it too much. There are also a few very nasty passages which take a certain amount of resolution to get through. If the protagonist’s views correspond with your views on life, you may find this meaningful, but I suspect most will just find it horribly depressing.