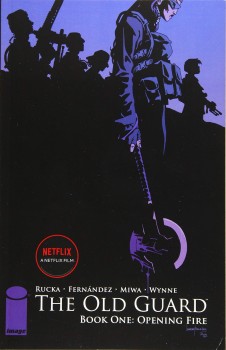 A team of mercenaries hide a huge secret, that of apparent immortality. They don’t understand it and don’t necessarily want it, but someone else does. And that someone is determined to get what they want at any cost.

Greg Rucka’s stylish graphic novel The Old Guard: Opening Fire hit renewed popularity with the release of the Netflix movie of the same name in 2020, which promptly shot to popularity on the straight-to-streaming channel, with a sequel getting the green light in January 2021.

I watched the film knowing nothing about the central premise or its origin in a graphic novel and was promptly sucked in by the slick, fast-paced plot and a bunch of immediately interesting and likeable characters. As an added bonus, it wasn’t wholly shot by the inadequate lighting of a 40-watt bulb, so I could actually see what was going on. Ten minutes after watching the film (highly recommended for lockdown viewing), I ordered both graphic novels and mainlined them as soon as they arrived.

The premise is simple – four warriors who find that they seemingly can’t – or rather, don’t – die. They’re not immortal, they just don’t stay dead. Andy, otherwise known as Andromache of Scythia, is the eldest. She’s slightly coy about her age in the film, but in the graphic novel it’s revealed that she was born in approximately 4,700 BC.

Then there’s Joe and Nicky. They met during the First Crusade and went from being enemies to lovers. They’ve been together ever since, and their relationship is an important part of both the book and the film. To Rucka’s credit, he made it a contractual obligation in the transfer from book to screen that their relationship was not to be ignored or altered, and a key scene from the novel was included verbatim in the film, bringing with it both the intensity of feeling and the humour that lies between them.

The fourth member of the group, Booker, first learnt that he couldn’t die during Napoleon’s disastrous invasion of Russia in the winter of 1812. He’s a youngster by comparison with his comrades,

None of them know why they don’t die. They just don’t. Although they know that death is a possibility, as Lykon, one of Andy’s early companions did die and stayed dead. They don’t allow that knowledge to weigh too heavily, and in the case of Andy and Booker, it quickly becomes clear that death is something they would happily welcome. For Joe and Nicky, it’s different. At least they have each other.

The story starts with the team – against Andy’s better judgement – taking on a job for former CIA operative James Copley to retrieve a group of students abducted in South Sudan. When the mission turns out to have been a set-up to obtain evidence of their immortality, the team go to ground, leaving Andy to make contact with a new immortal, who they’ve just learned about at the worst possible time, with their closely guarded secret now out of the bag.

US Marine Nile Freeman discovers there’s something different about her when she survives what would have been a fatal slash to the throat in Afghanistan, and her comrade swears that Nile bled out in her arms, although the fact that Nile is still alive and healthy speaks strongly against her supposed death.

Naturally, there’s a crazed scientist in the mix, a staple of many superhero books and films, who’s determined to find out the secret of why the group don’t die, and equally naturally, he wants to make money out that secret.

The action is fast and furious – literally so, on many occasions. The art is a visual feast, strongly drawn by Leandro Fernandez and vividly coloured by Daniela Miwa with lettering by Jodi Wynne. The panels cram in a huge amount of detail without ever feeling over-crowded, with colours carefully chosen to give a thematic feel to the open pages with no jarring transitions. Flashbacks are clearly signalled, making it easy to follow the story through both past and present.

As an action thriller this works excellently. It has consistent depth of characterisation and a strong storyline. I liked all the characters (although so far as the men were concerned, their on-screen versions are considerably better-looking!) They are dangerous and deadly, both individually and as a team, their skills honed by almost unimaginably long combat experience around the world.

Don’t make the mistake of writing the team off as just another bunch of wham-bang-saved-the-world-again-home-in-time-for-tea superheroes. The Old Guard are much, much more than that.