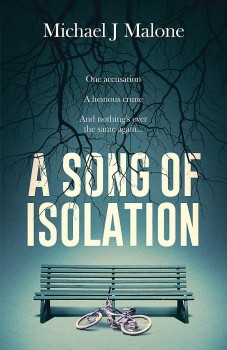 A Song of Isolation

Rising young film star Amelia Hart is the toast of the media. She gives up her career for her accountant boyfriend. Then he is accused of child sexual abuse.

Scottish poet and author Michael J Malone has never shied away from emotion or controversy in his four previous bestselling novels. But this atmospheric, compelling, powerful, moving, and unashamedly emotional story raises his work to a new level and is one that will stay in the reader’s mind a long time.

It’s not just the almost taboo subject of child sexual abuse that makes this book so shocking. It’s also his forensic examination of the cult of celebrity; the failures of a legal system that can send an innocent to prison in the misguided belief that ‘victims’ must always be believed; the impact and dealing with the aftermath of negative publicity with its power to destroy lives in a moment; stalking; mental health issues, and grief. Malone tackles all these intensely topical subjects head on in a brutal psychological thriller that could be ripped from tomorrow’s tabloid front pages or the Twittersphere.

This beautifully written, original, engrossing and scary story, told from three points of view and over a nine-year period up to the present, will keep you guessing – and drive home Malone’s unstated point that one ‘crime’ can produce far more than a single victim.

Part-French actress Amelie Hart is the darling of the media. Beautiful and fascinating, her face is everywhere as her career rockets. But she harbours deep fears from a horrifying stalking incident in her past and is afraid of total commitment. Her story becomes even more headline news when she gives up the prospect of a brilliant Hollywood career for an unknown accountant, a man who can only be described as ordinary. The gossip columns are aghast when she returns to a quiet life in Scotland.

The story moves from the showbiz to the front pages when her boyfriend Dave is arrested on charges of sexually abusing a neighbour’s young daughter. He insists on his innocence and Amelie believes him, despite his rejection of her for what he stubbornly thinks is her own good.
He is proved partly right when a witch hunt, whipped up by the popular press and social media, leads to physical violence against her, and she is forced to flee the country.

Meanwhile Dave is convicted in what can only be described as a farce of a trial, is locked up with the ‘beasts’ – Scottish prison slang for the most depraved sex offenders – and faces his own problems, both mental and physical, as he tries to maintain his belief and sense of balance.

Amelie tries to rebuild her life in the busy French port city of Bordeaux and reconnect with her family’s past interest in the wine business for which the area is world-famous, but continues to support Dave every way she can, Malone’s focus switches to Damaris, the young ‘victim’ at the centre of the story, an isolated child in a financially struggling family trying to make sense of an adult world.

Malone is the master of twists, turns and the unexpected and this is superb storytelling from a master of the craft. The reader is left constantly wondering what is truth and what is fabrication, and because the story is so grounded and realistic the suspense never lag. The psychological aspect and the development of the characters is first-class. Even minor players, while not all exactly likeable, such as Amelie’s ebullient actress friend Lisa or her struggling homosexual agent, add realism and something special.

A Song of Isolation is a breathtakingly dark, moving and emotional psychological story that peels back the magpie glitter of celebrity to uncover a more sinister world dominated by greed and lies that can lead to the destruction of innocent lives.