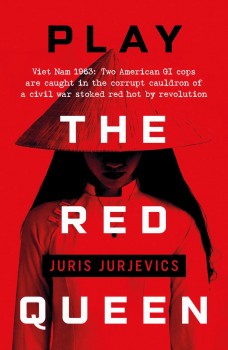 In 1963 Saigon, army investigator Ellsworth Miser is tasked with closing down a female Viet Cong assassin who has already killed three US army officers.

For readers who enjoy history as well as a thrilling story it is always great to find a book that gives you both, especially to this extent. In Vietnam, by 1963 the French had abandoned their attempt to re-establish colonial rule and the USA’s direct involvement in the war was as yet limited to military ‘advisors’. The true nature of the regime in place, and America’s role, was however much more complex than that represented in the western press, and is laid out here as background to the story featuring Army CID sergeants Miser and Robeson.

These two protagonists enter the tale when they are assigned to halt the activity of a young woman they call the ‘Red Queen’ for a calling card she leaves on her kills. She arrives on the back of a motor scooter, kills a selected target with a crack shot and is away fast. Miser eventually discovers she is the last member of a family killed by government agents, trained from birth in military skills.

The Red Queen is also said to have some senior figures in her sights, of whom President Diem and Henry Cabot Lodge, US Ambassador to Vietnam, are particularly mentioned. Lodge is said to be embarrassed by the brutal actions taken against Buddhists by Diem and his brother Nhu, which led to some priests immolating themselves in a petrol-fuelled bonfire. A coup against Diem is rumoured to be in the wind, and the position of Lodge on this is a matter for debate.

Part of Miser’s investigation leads him to examine details of the victims and all are found to have links to the Commodity Import Program, which made available millions of US dollar credits to selected Vietnamese to purchase goods, with a view to boosting the local economy. It turns out that most of the goods imported were of limited use for this purpose, but the scheme was generating huge gains for not only friends of Diem but practically all the major players including, amazingly, the Viet Kong.

As the true facts about how Saigon operates are slowly exposed, layer by layer, it seems that nothing is what it seems, and everyone is on the make. Even Miser himself is eventually revealed to have one or two schemes designed to ensure he is not unrewarded for the admittedly dangerous situations in which he habitually finds himself.

In a post-script, the author’s widow refers to Juris Jurjevics’ wish to ‘bear witness’ to ‘an underreported aspect of the Viet Nam war: the elaborate, even treasonous corruption - and our complicity in it.’ The book certainly does that, while also conveying a picture of life for both locals at all levels and a sympathetic American who had to interact with them. And to top it off, there is the gripping tale of Miser, an investigator with multiple enemies in a place where life is very cheap.