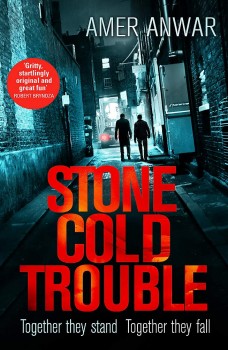 Zaq Khan is trying to keep out of trouble when his brother Tariq is badly beaten. Whether this was a problem of Tariq’s own making, or a message from someone in Zaq’s past, Zaq needs to take them down.

After five years in prison for manslaughter following a pub brawl, the best work Zaq can obtain is as a driver for a local builders’ merchant, Mr Brar. In Amer Anwar’s previous novel, Brothers in Blood, Brar demanded Zaq undertake certain services that put him at risk of re-arrest. Zaq is still trying to keep his head down, while remaining alert against the risks arising from those who have a grudge against him for events in the past.

Zaq is a young man of Punjabi parents, part of the Indian and Pakistani community in Southall and surrounding districts. For Zaq and his peers, the differences of religion count for less than the culture that Sikhs, Hindus and Muslims of the sub-continent all share, respect for elders being a conspicuous feature, as well as a willingness to help out when someone is in trouble.

So when Zaq’s best friend Jags calls on him to do a favour for Jag’s uncle Lucky, he is ready to go. Lucky has been foolish enough to gamble with strangers and lost a valuable necklace he put down as collateral. The man who won it, Shergill, refuses to return the necklace even if the cash owing is paid. Zaq and Jags pay Shergill a visit with additional cash, but the man refuses the exchange; he and his gangster associates are unpleasant with it.

Zaq is distracted, however, when his brother Tariq is viciously assaulted after a wedding at which he ran the disco. Tariq has several broken bones but the greatest worry is a blood clot on the brain that might be permanently debilitating. Zaq fears that the attack might have been inspired by something from his own past, and immediately sets to work to find out who was behind it.

The two plot lines are eventually and unexpectedly brought together, but only after some intensive investigation, trailing suspicious persons across London, and several rumbles with a variety of thugs. Zaq has maintained the fitness and fighting prowess he developed inside, and this certainly comes in necessary. His violence is reactive, however, and even while his blood is boiling for the hurt done to his brother, he restrains himself.

While the linear direction of the story and the emphasis on fighting makes this a fast-paced tale full of action, there are other aspects which give the book more breadth. The necklace has a back story that will be of interest to anyone who has heard of Duleep Singh, the last Maharajah of the Punjab. Zaq also at one point must call in assistance from a major thug, who asks, and is given, a recommendation for reading matter - Elmore Leonard. What enlightened people are reading, indisputably.