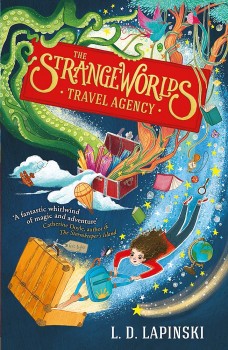 Twelve-year-old Flick Hudson has moved with her parents to a new estate on the edge of a village called Little Wyverns. She’s not very happy about the move as she liked their flat in the city. She’s also not keen on the amount of time she’s expected to spend doing things for Freddy, her baby brother, after all, he’s her parents’ baby, not hers. So, at the first opportunity, Flick goes off by herself to explore her new surroundings.

She’s drawn to a shop in the village in an alley next to the church. The sign saying The Strangeworlds Travel Agency is intriguing. At first, the shop looks untidy and unloved, but when Flick looks closer, she feels an odd sense of excitement. There’s a wall that looks like it’s made up of innumerable battered old suitcases and when she meets the shop’s owner, Jonathan Mercator, her intrigue deepens. He’s eighteen, but his odd, old fashioned clothes make him look older. He tells Flick that the Travel Agency is the best in the world and can send people anywhere they want. She’s sceptical but continues to poke around.

When Flick picks up a broken piece of glass from the fireplace and looks through it, she suddenly sees the world differently. It glitters and she can see what looks like a crack in the air, like frozen lightning. So when Jonathan tells her that magic is real, Flick finds that it’s not hard to believe him.

The Strangeworlds Travel Agency is an inventive, original middle-grade thriller, where magic is real, and you can travel to a new world by climbing into a suitcase and pulling it through after you. After some initial short explorations to accustom Flick to the idea of different worlds, the pair tumble headlong into an adventure in a city called Five Lights where strange things are happening, and entire streets are just vanishing.

Sensible, pragmatic Flick and the sarcastic, sometimes secretive Jonathan make a good team until Flick realises just how much Jonathan has been keeping from her, but to save themselves and Five Lights, they have no alternative other than to work together.

LD Lapinski’s different worlds all have their own magic. She injects plenty of realism to provide a heady mix of the familiar and the very unfamiliar. Five Lights and its Thieves’ Guild have echoes of Ankh Morpork, with thieves needing a licence to ply their trade, but that resemblance doesn’t in any way detract from the world Lapinski has created. There’s a real sense of wonder in the book, but that goes hand in hand with darkness, and there’s a very real sense of danger, too, as the fate of Flick’s own world is inextricably linked to what happens to Five Lights.

The Strangeworlds Travel Agency is fresh, funny and exciting, and it will almost certainly leave you wanting to haul your own battered suitcase out of the attic.