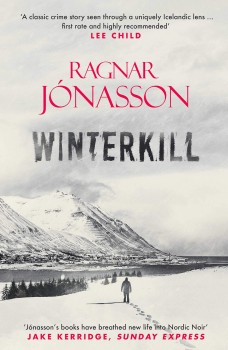 As snow gently falls on the northernmost town in Iceland, a young girl falls to her death from a balcony on the main street. And when an old man in the local nursing home writes 'she was murdered' on the wall of his room Police Inspector Ari Thor Arason has a puzzling case on his hands.

Winterkill is the sixth book in the Dark Iceland series to feature Police Inspector Ari Thor. The notes tell us that author Ragnar Jónasson translated, from the age of 17, a large number of Agatha Christie novels into Icelandic. This current translation by David Warrender (unlike the previous books in the series) is from the French edition and I felt on occasion that the wrong word had been chosen or that the original meaning may not have been truly conveyed. And I couldn't be sure whether this was a problem with the original text or with the double translation.

For me the star of the show is the unpronounceable Siglufjordur – a small town grown up around the now defunct herring industry and recently rejuvenated as a ski resort. In the northernmost part of Iceland and in the skids compared to Reykyavik it is undoubtedly a majestic and stunning location. Cold, snow, ice, power cuts and fjords dominate this investigation into the violent death of a young woman – an investigation which takes place over one Easter weekend as a blizzard closes in.

A local girl is found dead in the street and it soon becomes apparent that her death might not be an accident. One problem for me was that it seems that secondary school education in Iceland can continue up to the age of 20. So the young woman whose death is at the heart of this mystery is portrayed as a naïve and innocent schoolgirl whereas, in fact, she is a 19-year-old young woman. This comes over as very odd.

Inspector Ari Thor is an interesting lead – newly promoted to police inspector he is settled in Siglufjordur but not feeling really at home. He half wishes for a transfer to a more exciting job in Reykyavik. And this duality characterizes Ari Thor. His estranged wife and three-year-old son have come to stay with him over the Easter holiday and part of him yearns for family life and wants to get back together with her. But the other part of him wants to get back with a former lover who turns up as a nurse at the local nursing home, which features prominently in this mystery. And he seems to vacillate between the two women in a most shallow way that makes him ultimately, for me, an unsympathetic character.

The list of suspects is rather sketchily drawn, and I found it hard to care about any of them. I had been hoping for a clever Agatha Christie-style of tying up all the loose ends, but I found that the conclusion of the two major storylines predictable and the whole thing rather fizzled out. I was left somewhat disappointed. I thought I had found n new and rich seam of Icelandic noir to keep me company on these winter nights but, sadly, I don't think I will be visiting Siglufjordur again.