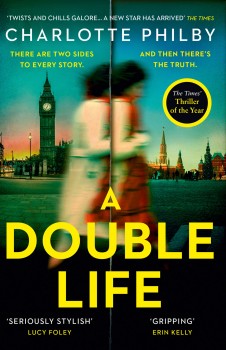 Foreign Office counter-terrorism expert Gabriela finds her life falling apart in a web of lies, while drunken, drug-taking journalist Isobel is in danger as she investigates people trafficking and prostitution.

Charlotte Philby offers that great truism that there are two sides to every story – and then there’s the truth – to create what is a cleverly written and deeply chilling examination of deceit featuring the lives of two very separate women.

Gabriela is a senior operator in an FCO counter-terrorism unit, running a small Whitehall-based team. Fiercely ambitious, she is the family breadwinner while her wimpish and unconfrontational partner Tom, a freelance architect, looks after their two small children.

In contrast to her ordered life, complicated only by the over-friendly and devious FCO mandarin Emsworth, Isobel is a complete mess. A journalist who has failed to realise her potential and drifts through a haze of drugs, drink and failed relationships on a struggling local paper in Camden, she witnesses a horrific attack while walking home from a party one night. But someone has seen her and is making themselves known in increasingly frightening ways. As Isobel starts to investigate, she finds herself in a dark network of human trafficking and exploitation.

When Gabriela returns from a seven-month stint in Moscow, her life begins to unravel. Promotion eludes her and the subsequent loss of her job makes her disillusioned, questioning the value of much in her life. She loves her children but cannot bear the thought of devoting much time to them.

She meets and becomes involved with Ivan, an apparently charming Russian oligarch and flees to Moscow to have a child with him. Meanwhile Isobel gets closer as she pursues her the story.

With one desperate to uncover the truth, and the other determined to hide it, the two women’s lives converge through the auspices of Madeleine, Gabriela’s former FCO mentor, now leading a unit at the National Crime Agency investigating people trafficking and prostitution.

Neither of the main characters is without flaws.  It’s difficult to have any sympathy for Gabriela who appears to be selfishness personified, constantly portraying herself as making sacrifices for her family while in reality shutting them out to fulfil her own wants and also capable of lying on a truly epic scale.

It’s easier to feel sorry for Isobel as she battles with a rising tide of fear while she continues to chase her story, but she’s still a mess entirely of her own making. Philby’s technique of consecutive chapters featuring each and the clever ploy of having Isobel’s narrative in the first person as opposed to Gabriela’s third, points up the differences between them.

The plot concentrates mainly on the women’s emotions and reactions, and is perhaps overlong and lacking some momentum. At times it seems rather inconclusive, raising more questions than it answers. The creeping unease and fear of both characters is brilliantly conveyed but the link between their stories, hinted at several times, means the revelation is not entirely unexpected.

This is a clever read, which at times struggles to justify the length. Philby has drawn on family history – her grandfather was the infamous double agent Kim Philby, the ‘Third Man’ of the Cambridge spy ring. A Double Life marks her as an interesting new voice in the genre.