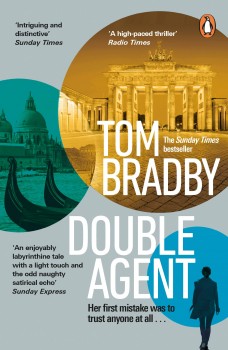 A Russian foreign intelligence agent offers to defect, bringing evidence that the British Prime Minister is in the pay of Moscow.

Kate Henderson of MI6 is taking a break in Venice with her children Fiona and Gus. It’s an opportunity to meet her husband Stuart who betrayed both his wife and his country, and is now living in Moscow. Unexpectedly, she receives an approach from Borodin, a senior agent in Russia’s SVR, successor to the KGB, offering to defect to the West.

Borodin asserts that rivalry with military intelligence, the GRU, puts him and his family at risk. As an inducement to the West to resettle him, he offers intelligence including evidence that British prime minister James Ryan is a spy working for the Russians.

The allegations are explosive: agreement to the resettlement suggests that they could be true, while a refusal could come later to look like cowardice or worse. At the insistence of the foreign minister that Borodin’s story be better substantiated before she makes a decision, Kate makes a dangerous trip to Russia under cover.

Events make it clear that her visit has been blown, but she is sufficiently persuaded that Borodin should be extracted to press the foreign minister to proceed. The operation goes ahead but once again enemies are aware of the plan, and this time their opposition takes the form of a direct threat to Kate and her family.

Complicating Kate’s assessment of the situation is the suspicion that her husband Stuart, codename ‘Viper’, was not the only Russian agent in MI6. The candidates are few, Kate’s boss ‘C’, his deputy Ian, and Kate’s subordinates Julie, Danny and Suzy, a new recruit. This very limited pool of suspects seems somehow at odds with the significance of the matters in play.

A similar dichotomy arises too between Kate’s super-spy activities and her concerns for her children. With one parent in Moscow, Fiona and Gus are understandably confused, but it is not always easy to sympathise with bratty teenage behaviour. Kate’s worries are understandable but again seem prosaic when set against matters of high politics.

Kate is at the centre of things throughout, and comes across as some variety of super-mum, juggling a family and career with added combat skills, facility with languages, and generally being the saviour of Western civilisation. Such are her management skills that she deals with the most disconcerting events with insouciance, which perhaps detracts from the excitement one might expect.

The book nonetheless held my interest throughout, with plenty of spy stuff, enough topical associations to make the politics familiar, and plenty of surprises. Those coming new to the series by ITV News at Ten anchor Tom Bradby, will find enough of the history to make it understandable without being burdened with too much backstory.