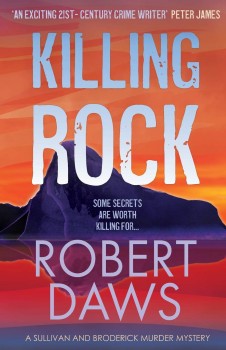 Gibraltar-based detective Tamara Sullivan joins forces with a colleague across the border to solve murders from the past and present.

Gibraltar’s mixture of the familiar and the exotic forms the backdrop for a series featuring two detectives who have relocated from the UK: Tamara Sullivan and her boss Gus Broderick. This is their third outing, and as it opens Tamara is told her application to join the Royal Gibraltar Police has been accepted.

Red tape requires that she spend a month on leave before joining, and she takes up the offer of accommodation across the border, house-sitting for Ric, a friend of her boss. Ric’s daughter Consuela is an inspector in the Malaga Police, and the two find they have much in common, especially when they both become entangled in nefarious goings-on.

Tamara is reluctant to leave Gibraltar, as a mummified body has been found there which engages her interest. However, forensics soon produce details which suggest a link with Broderick; he is suspended and Sullivan is called back to Gib to assist.

She is also playing a role over in Spain. Consuela has caught a case involving the murder of three people in a swimming pool and is called when a body is found in a local river killed in much the same way. Tamara accompanies her friend, and when she spies someone observing the scene gives chase on her motorbike.

Robert Daws gradually introduces glimpses of the persons behind these various crimes, and their motivations. I have to admit to some curiosity as to how he planned to make the events plausible, and confess that the story when eventually revealed did strike me as rather far-fetched.

Daws does not spend too much time on Gibraltar’s particular features and culture, which come across more strongly in Thomas Mogford’s Spike Sanguinetti series, for example. But enough is given to offer the reader a taste. Sullivan crosses the border regularly in the book and there are a few remarks about the queues, with the focus very much on the crime story and other observations made only in passing.

I liked this well enough as a police procedural; Sullivan has an engaging enthusiasm and her initiative is given plenty of scope by encouraging superiors. Her foes I find less convincing – high-functioning homicidal maniacs in the Patricia Cornwell mode. Such characters always seem to me to be more about giving readers a frisson than anything, which is fine if you enjoy that kind of thing.