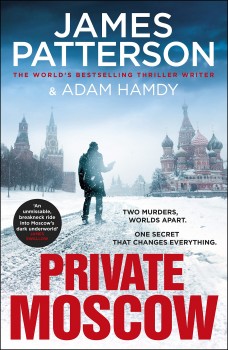 One of PI Jack Morgan’s oldest friends is shot dead at his company’s New York public launch. In Moscow an office worker is murdered in a bomb blast. Morgan finds a link and exposes a deadly conspiracy.

I’ve been slow in catching up with the improbable career of ex-US Marine fly-boy Jack Morgan, founder and owner of Private, the world’s largest intelligence and detective agency. But judging by this 15th story, co-written with Brit author and screenwriter Adam Hamdy, I’ve not missed much!

In Private Moscow the co-conspirators seem to have added in almost every device known to generations of espionage thriller writers, including the top secret ‘sleeper’ school in the Russian wilderness where orphaned children are given new identities and brought up to infiltrate American business and politics!

Morgan’s friend and former Marine flight instructor Karl Parker has invited him to the New York Stock Exchange to celebrate the public launch of his company, but is shot dead by an unidentified gunman. When a female office worker is blown apart by a bomb in a Moscow bar, Jack somehow sees a link and heads to Russia at the beginning of a wild and crazy ride that could have serious political and security implications.

The almost non-stop action sequences – enough to fill at least two sizeable novels including a gun fight on a plane – alternate between a sub-zero Moscow and an equally freezing America as Morgan and his staff in both countries, an improbable collection of totally loyal and motivated experts the intelligence services of either would envy, close in on the truth.

It’s all so abysmally over the top that it’s almost comic, a literary version on Rambo and other Hollywood melodramas designed to boost the Trumpian myth of the American way of life as so superior to any other, that even its opponents come to recognise the fact and become ‘good’ Russians!

Morgan himself typifies the myth. Despite the fact that he must be now well into middle age, he is still mentally sharper, physically harder, more determined than opponents much younger – and, of course, almost irresistible to the opposite sex! The US Marine Corps has produced a lot of fictional literary heroes, but he takes the Corps’ myth to a new level.

Last year I might have described this as a perfect escapist holiday novel. Under prolonged semi-isolation I just found it ludicrous, overblown, under-serious and lacking any form of gravitas.