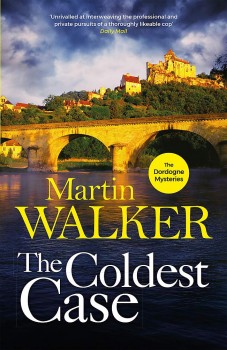 With the ever-present danger of forest fires adding to his workload, Bruno, Chief of Police, still finds time to help investigate a cold case that has haunted his friend J-J throughout his career.

In the world of Bruno Courrèges, Chief of Police for the Vézère valley, Covid-19 hasn’t come to trouble the world and French markets are still in full swing, hugs and kisses remain the norm and the sun is shining strongly on a less troubled countryside.

The relentless summer sun in the Perigord region of the Dordogne has brought problems for the locals – the ever-present threat of forest fires than can ravage huge swathes of a countryside thick with oak trees. The pompiers are alert, as are the local volunteers and even the gendarmes. It’s all hands to the pump – quite literally – when there’s a fire alert, and Bruno seems to be constantly on call in his capacity of policeman and general problem-solver for the region.

Amidst bags of local colour and recipes to die for, there’s also a genuine mystery at the heart of the book, a cold case that has long haunted Bruno’s colleague Jean-Jacques, known to everyone as J-J, Chief of Detectives. J-J was unable to solve his first case, the murder of a young man whose body was found by a truffle hunter deep in the woods, and that failure has remained with him for 30 years. J-J keeps a photograph of the skull on his office door as a reminder.

On a visit to the Museum of Prehistory in Les Eyzies, Bruno is struck by the lifelike reconstructions of ancient skulls and wonders if the same techniques could be used to put flesh on the bones of ‘Oscar’, the name J-J gave to the unknown dead man who’s never been far from his thoughts. Bruno’s invitation to the young woman to work on Oscar sets in train a series of events that link the murky world of espionage with police work in the Dordogne and prove that no matter how deep the past is buried, it can still be brought to the surface with predictably dramatic results.

Martin Walker’s strength lies in his ability to bring out the character and charm of the region and interlace this with a strong plot that carries an equal sense of time and place. Bruno’s love life is still as complicated as ever, and I still can’t warm to his occasional bedfellow, Pamela, the Englishwoman who runs the riding stable where Bruno keeps his horse. What Bruno really wants is to settle down with Isabel, but she’s still wedded to her job in Paris dealing with high-powered crises in the intelligence world. He also wants kids, something that’s thrown into sharper focus now that his basset hound Balzac is a proud parent.

Between basset breeding, more veggie cooking (yes, we do even have veggie restaurants in the area now!) and forest fires, the backdrop is as rich as ever. The scene at the castle of Castelnaud where Bruno presses its impressive collection of medieval siege weapons into service to protect the ancient stronghold from destruction was great. Let’s face it, who hasn’t wanted to play with the trebuchets?

For anyone who is missing their trips to France in Plague Year, this book is the perfect way to transport yourself to one of the country’s most beautiful regions. And if you’re new to the series, you might just find yourself with another holiday destination to add to your list when we’re able to travel freely again.