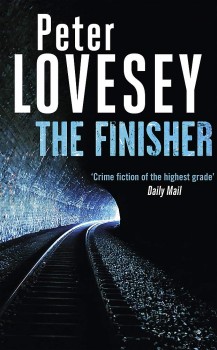 As teacher Maeve Kelly struggles to compete in a charity half marathon, Superintendent Peter Diamond, tasked with crowd control, spots a violent criminal he once jailed – and his suspicions are raised when a runner disappears without trace.

This story is the 19th outing for the cranky, short-tempered Peter Diamond of Bath CID, who for some reason I fail to understand, has never made it to the small screen.

Twisty plots, humour and the immaculately researched scenic detail of Bath’s centuries of history dating to pre-Roman times make it an absolute natural compared to much of the standardised violence now on offer!

Peter Lovesey has rarely put a foot wrong, and this is no exception. There’s plenty of suspense in a case that has all the ingredients of a first-rate mystery. In one of his cleverest stories told in his usual elegant style, there’s action too, all punctuated by his trademark wry humour.

Teacher Maeve Kelly signs up for the Other Half, Bath’s overspill half-marathon, to raise money to assuage a guilty conscience after destroying a valuable gift for the British Heart Foundation. Her struggles with training form an all-too realistic background familiar to all those who have ever tried!

Meanwhile, two illegal Albanian refugees escape from a slave labour group run by a ruthless killer known only as The Finisher.

Race organisers and the police are anxious to prevent any incident like the terrorist attack on the Boston Marathon, so all available law enforcement personnel are called in to provide security.

Detective Superintendent Peter Diamond is hardly thrilled to be tasked with race day crowd control, but when he spots a violent sex-obsessed criminal now out on parole, and then one of the runners fails to finish and disappears without trace, he begins to wonder if he was a spectator to the prelude to a murder? Diamond has a hard time convincing his bosses and colleagues to take him seriously, but through a series of twists and dead ends eventually arrives at the truth.

If you think a story about marathon running and human trafficking doesn’t seem an obvious fit, you misjudge Lovesey’s pacing and skill. Never too fast to leave the reader out of the investigation, nor too slow to bore, his vibrant characters – particularly the no-nonsense Russian Olga – will push you towards the finish.

As always, the ancient city has its part to play. From the opening lines: ‘The city of Bath isn’t all about Roman plumbing and Georgian architecture. It offers unrivalled facilities for getting rid of unwanted corpses’, it is far more than a convincing historical backdrop.

Lovesey is known for writing ‘classic’ mysteries, a style now going out of date in a swing towards gritty, violent realism. But if you like your police procedurals intriguing, solid and well-written, there’s still no one better.