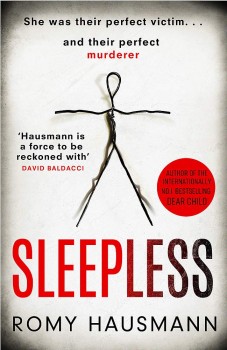 Nadja Kulka, wearing a wig and borrowed clothes, drives a car along unknown country roads to a remote house. She is nervous and unsure of the destination, but as she agreed to help her friend Laura, she has no choice but to deliver a body.

Years ago, Nadja Kulka was convicted of a horrendous crime and sentenced, even though she continued to deny own involvement, blaming someone else. After her release from prison, she wants nothing more than to live a normal life with a nice flat, steady job, even a few friends. Her emotional state is very delicate, but she manages to get through simple days.

When one of her friends, Laura von Hoven, a free-spirited beauty and wife of Nadja's boss, Gero van Hoven, one of the partners at the law firm, asks for help in a desperate situation, Nadja doesn’t feel able to refuse. Although shocked that Laura has killed her lover, Nadja feels that she has to help her friend even though they are not so close any more. The problem is that the help involves getting rid of the body.

The two women drive separately to a remote house in the woods, the perfect place to bury the evidence. Unfortunately, their plan doesn’t go as intended when they arrive at their destination. Gero turns up unexpectedly and, as a powerful lawyer decides to play a game, asking Nadja to pretend that she is representing Laura in a court case; asking detailed questions about the love affair, and eventually using the gun to make a point. But what point is something Nadja cannot work out, veering between being scared and reckless, and finding herself outplayed, a pawn in a bizarre plot in which she is both the perfect victim and the perfect murderer. Everything appears to be about her disturbing childhood, guilt and retribution.

To be honest I wasn’t quite sure what was going on when I started Sleepless, or who the main narrator was. The timelines went in two different directions and didn’t seem to be connected other than being about strange love. There were poignant letters trying to explain the past and the consequences of something terrible that had happened. However, from the very beginning I felt compelled to keep reading to find out what possible links there could be between a very lonely young woman travelling in disguise across the country and another young woman who several years earlier fell in love with a married man and believed everything he had said.

Neither of them was happy, but with this statement on the first page drew me in and kept me reading: ‘It's over, my angel. Today I'm going to die. Just like her. He's won.’

Romy Hausmann, author of Dear Child, has produced a very good second novel, translated from the German by Jamie Bulloch. Hausmann poses questions about the effects of a difficult childhood, and the creation of an alternative world to cope with reality. All these elements push the narration into the main question of how much the main character wants to remember of the past. Sleepless is dark and deeply unsettling, weaving the two stories together until all connections are explained,