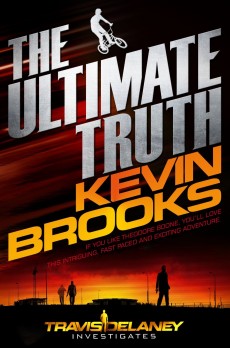 Travis Delaney’s parents have been killed in a car crash. At the funeral, Travis is convinced he’s being watched and his attempts to get to the bottom of that mystery are going to prove to be dangerous.

The Ultimate Truth hits the ground running, something even more important in young adult books than elsewhere, with 13-year-old Travis Delaney grieving for his parents’ death at their graveside. But despite how he’s feeling, Travis still notices a man there who he doesn’t recognise, a man with cold grey eyes and a hidden camera in one of the buttons of his coat. It’s a stark opening and a very effective one.

Kevin Brooks writes for both adults and young adults, not an uncommon state of affairs now as readers of John Grisham and Kathy Reichs, to name only two, will know. He makes sparing use of flashbacks to explain the build-up to the car crash in which Travis’s parents, who ran a private investigation agency, died. Travis is niggled by the thought that he’d been watched and wants to find out why, and the obvious place to start looking is what cases they were working on at the time of the death.

The only snag is that their office has been trashed and looted on the night of a riot in town, leaving Travis and the unconventionally dressed secretary, Courtney, to sift though what’s been left. When Travis finds some photographs in his parents’ safe, he recognises the man with grey eyes who was filming him at the funeral.

As Travis digs deeper, he finds that his parents were looking into the disappearance of a young man called Bashir Kamal. Bashir’s parents are claiming that he’s gone to Pakistan to looks after a sick relative but Travis isn’t convinced, and he’s determined to follow in his parents’ footsteps and dig a bit deeper.

In what is clearly going to be the start of a series, Brooks pits Travis and his friends and family against the CIA, MI5 and a shadowy arm of the security services known only as Omega. There are wheels within wheels in the story, and it’s every bit as enthralling and complicated as an adult thriller.

Having started by swiftly resolving the dilemma facing every writer for children and young adults – namely that of how to get rid of the parents – Brooks then goes on to flesh out the character of Travis’s granddad, a complex character, formerly in the army intelligence corps, who still suffers from the effects of a shrapnel wound in his leg that led to him leaving the army and starting up the detective agency subsequently run by Travis’s parents. Grandad suffers from bouts of depression, but he also proves to be a formidable ally, in a nice mixing of the generations.

I would have liked to have seen more of Evie, a girl from a tough estate, who gave Travis a run for his money in the boxing ring, and Travis’s friends, streetwise, tough Mason, and huge, quiet Lenny, who might not talk a lot, but is capable of barging open locked doors. The teenagers have a hard edge wholly lacking, for instance, in Grisham’s worthy but dull Theodore Boone series, especially the kids from the Slade estate, who aren’t in the least bit fazed by having to go up against men with guns. As Evie reminds Travis, they’re up against guns every day. As The Ultimate Truth is billed as the start of the Travis Delaney series, I hope we’ll see more of Evie, Mason and co. They’re tough, streetwise and extremely engaging.

The book is slick, believable and never talks down to its audience. It lacks the flashy, over-the-top action of Antony Horowitz’s Alex Rider books, but is none the worse for that, and the ending is as complex and multi-layered as any adult book.