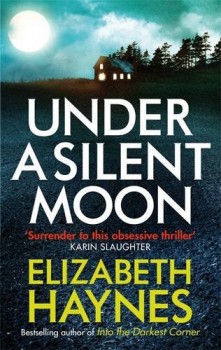 Under a Silent Moon

DCI Louisa Smith is called to a murder scene in a farm cottage where a young woman has been beaten to death. Then hard on the heels of this, someone in the same village seemingly commits suicide by driving into a quarry and Louisa had to determine whether there’s any connection between the two events.

One of the good things about crime fiction these days is that there’s no shortage of strong, believable female protagonists, and newly-appointed Detective Chief Inspector Louisa Smith fits easily into that same mould. She’s called out to the brutal murder of a young woman at a farm cottage. And then, just to prove that life in the country is anything but a rural idyll, a local woman apparently commits suicide by driving her car into a flooded quarry.

When the police start their investigations, there’s no shortage of suspects as the victim is rumoured to have been having sex with half the village, both men and women. Neither Louisa nor her bosses are believers in coincidence, and the two investigations quickly become joined up.

Under a Silent Moon is told from a variety of different points of view, from Louisa herself to former lover, DI Andy Hamilton, a man who has no qualms about playing away, despite the fact that he’s married with children, through a variety of other characters, all equally deftly portrayed.

Louisa kicked Hamilton into touch when she realised he was married, but like many of her male counterparts in crime fiction, she seems quite prepared to risk the integrity of her position by getting involved with someone on her team, and her neediness with regard to personal relationships feels rather too much like an unnecessarily forced descent into the flawed heroine/hero trope beloved of so many writers.

The same could also be said for Hamilton’s introduction into the realms of some rather extreme sexual practices at the hands of someone who is both a material witness and a potential suspect. Even for someone portrayed as a risk taker, that sub-plot seems a stretch of the imagination too far, and I’m not really sure the book needs it.

Under a Silent Moon is at its best when it focuses on the police work its author clearly knows so well. This is a crisp, competent tale from a former police intelligence analyst and the procedural knowledge positively jumps off the page, with the addition of Jeffery Deaver-style witness statements and even an appendix of flowcharts for those who like to treat crime books as a puzzle. However much attention you like to pay to such things as the narrative progresses, this is a book that should appeal to anyone who likes their books solidly grounded in – but not overwhelmed by – realistic detail.