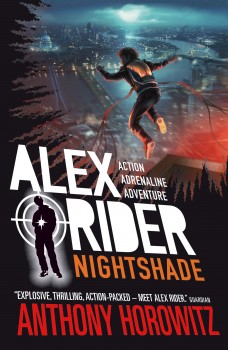 Former teenage spy Alex Rider is dragged out of retirement by MI6 for one more operation and forced to go up against the most dangerous opponents he has ever faced – Nightshade, a criminal organisation that uses child operatives trained as assassins.

Teenage spy Alex Rider was first introduced in Stormbreaker, just over 20 years ago. A lot has happened in his life since then, but Alex has only aged by one year, something many of us will envy! He’s packed a huge amount into that period, hurtling from one dangerous mission to the next, with no time to draw breath or even come to terms with what’s happened to him or deal with any of the associated trauma.

He has no desire to keep working for MI6, and in that regard he’s in total agreement with Dominic Royce, the recently appointed Permanent Under-Secretary for Foreign Affairs, who is very unimpressed to learn that the Special Operations division of MI6 has been regularly using the services of a 14-year-old boy. The fact that Alex has recently turned 15 cuts no ice at all, and Mrs Jones, now head of the Special Ops Division following the retirement of the ruthless Alan Blunt, is put under orders never to make use of Alex again, as the government has no desire to be embarrassed if their links to him become public knowledge. Royce thinks the knowledge that Alex’s work is an open secret throughout the world’s intelligence community is bad enough and he now wants to contain that damage.

Naturally, trouble follows Alex around like a bad smell and, equally naturally, Mrs Jones has the moral compass of a starving alley cat when it comes to her teenage asset. Despite her occasional flashes of conscience, she’s more than capable of using him when the need arises, which it does very quickly. Whispers of a new kid on the block in the worldwide criminal underworld have already reached her ears, one that makes Alex’s former opponents, Scorpia, look like a troop of wannabe Scouts. And for Mrs Jones, Nightshade quickly becomes very personal indeed.

Alex reluctantly agrees to go under cover in MI6’s most secret facility, a secure prison in Gibraltar, housing prisoners with no hope of parole or release. Alex’s job is to get close to a known Nightshade operative, a 15-year-old killer called Freddy Grey, presumed dead in a boating accident when he was a toddler, but in reality, kidnapped by Nightshade, brainwashed and turned into a highly skilled assassin. And Freddy isn’t the only child this has happened to. All Nightshade’s field agents appear to be children, and, as MI6 and Alex know only too well, adults hardly ever expect children to be dangerous and they certainly don’t expect them to be spies or assassins.

Alex is assured that this is as safe as any uncover job could be. All he has to do is impersonate Julius Grief, the deranged clone surgically altered to look like Alex who first appeared in Point Blanc, Alex’s second adventure. Julius is now dead, killed by Alex himself, but the inmates of the Gibraltar prison don’t know that. All they know is that Julius succeeded in escaping, and so his return to prison following recapture won’t come as too much of a surprise. As ever, promises made by MI6 tend to get broken very quickly, and this operation is no exception to that rule.

With this latest book in his long-running series, Horowitz conclusively proves that 20 years has done nothing to dull the appeal of Alex as a character and the series remains as sharp as a cut-throat razor and as hard-hitting as a wrecking ball. There’s now no glossing over the effect on Alex of his continued missions, but he’s as brave and resourceful as ever, and endlessly inventive when it comes to his escape and evasion methods.

Horowitz effortlessly creates and maintains tension and succeeds in ramping this up to almost impossible levels without ever tipping over into the wildly improbable. Alex’s trademark sass and sarcasm is as strong as ever, without the books being peppered with the swearing and violence that has become common currency in teen and YA books. Alex also avoids deliberately using lethal force and the only time he ever shot to kill was when facing his own clone, and even that was in self-defence.

The book also builds on hints dropped over the years about Mrs Jones’ backstory, and there’s plenty of character development for her, too. She’s complex and ruthless, and as ever there is stacks of moral ambiguity in her dealings with Alex. It’s these shades of grey that give depth to the series.

If there is a weakness, it lies in Horowitz’s cavalier attitude to continuity and detail. Names change between books and he seems to forget Alex’s complex backstory and even some of his exploits, such as his past familiarity with skydiving. On top of that, fitting real world events in over a period of 20 years presents almost insuperable challenges when the protagonist has aged by only a year, but in general this is avoided by loosely setting the books in what passes easily for the present day, whenever that happens to be. Just don’t ever try to work out a detailed timeline for the books in relation to the age of the major characters. That way lies a lot of head-scratching and spilled ink. Just make jazz hands in the air and enjoy the ride.

Nightshade is one of those books I never wanted to end. If I’d had the choice, I would have gone straight onto the next book in the series, and I know it’s a reviewer’s top cliché, but for me, Alex’s next mission can’t come too soon. Here’s to Alex Rider, reluctant teenage spy, and the next 20 years! And with a second series of the equally entertaining Amazon TV series now in post-production, fans won’t have too long to wait for their next fix.