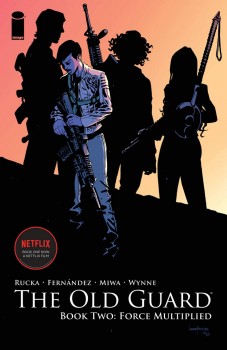 The Old Guard must go up against someone from their past. Someone else who can’t die. And just to complicate things further, Andy is having a rather large meltdown.

The Old Guard are back. Andy (originally Andromache of Scythia, born over 6,000 years ago) is tired of her seemingly endless life. She’s seen too much and lost too much, and the pain is starting to get unbearable. She knows now not to get attached to other people.

She’s been with Joe and Nicky for a long time (those two met and became lovers during the First Crusade when they fought in opposing armies) and knows she can rely on them. She’s also getting to know Nile Freeman, the latest addition to the team, whereas Booker, who learned he couldn’t die in 1812, has been exiled by his friends for 100 years for betraying the group to the founder of a pharmaceutical company who wanted to learn the secret of their apparent immortality, whereas all Booker wanted to learn was how to die.

One of the major losses in Andy’s life was that of Noriko, cast overboard on a sea voyage a couple of hundred years ago. The flashbacks to her loss are horrifically and dramatically portrayed in muted blue tones, perfectly portraying both the sea setting and the storm. Noriko’s return takes her old companions by surprise and it quickly becomes clear that the ordeal of drowning over and over again at the bottom of the sea for more than a hundred years has irrevocably changed her. What moral compass she had has been massively skewed and she’s now on the wrong side of the tracks so far as her former comrades are concerned.

In this second Old Guard graphic novel we learn more of their backstories, which gives depth to them and their view of the world. Andy is at the end of what has obviously been a very long tether, but that has now snapped. Nile, the newest member of the team, isn’t prepared to let Andy wallow in her grief. The others close ranks around her, but it’s not enough. Going up against someone she was once so close to is almost more than Andy can bear but she won’t abandon her friends, so battle is joined between the former comrades.

Leandro Fernandez’s artwork is as powerful as ever and Daniela Miwa’s colouring fits the mood and action of every panel perfectly, making the book an excellent visual experience, with Jodi Wynne’s lettering succeeding in being both unobtrusive but easily readable. The detail in each panel positively leaps off the page and no matter how often you look, there’s always something new to see.

This is a very strong sequel that fleshes out all the characters even more, while moving their story on in a satisfying way. For those who enjoy these books, the group have now made a welcome transition to the screen with Netflix’s slickly entertaining action movie, now greenlit for a sequel.