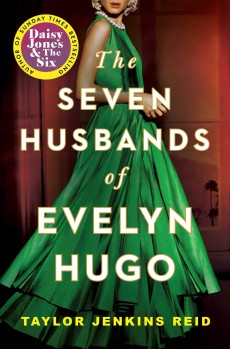 The Seven Husbands of Evelyn Hugo

Once the hot property of Hollywood, Evelyn is now writing her own script. But her life story may hurt more than one person as it unfolds.

The aging but still elegant Evelyn Hugo, almost as famous for her reclusiveness as she was for her iconic Hollywood status, has at last decided to open the curtains on her glitzy and gritty life. But her choice of biographical writer, an unknown New York journalist called Monique Grant, is a mystery to all – not least Monique herself.

Monique, though at first understandably nervous about such a daunting task, soon settles into her role. Rightly so, as she has nothing to lose. Her husband has moved onto pastures new, and her professional life is a stagnant pond. With this prestigious biography under her belt, Monique will have a way to boost her career – and her bank account.

As Evelyn’s Hollywood-and-beyond story unfolds, Monique is treated to a banquet of the star’s memories and experiences. But as with all feasts, not every platter is as palatable as it appears. Evelyn may have had a powerful work ethic during her long career, but her ruthlessness, her narcissism, and her neediness, are, at times, hard for Monique to digest. Even so, she finds a connection with Evelyn until the end of their time together, when the motivation for this unrelenting star’s choice of author becomes clear.
This is an archetypal beach read, or one for a weekend when the weather drives you in front of the fire. Although this is portrayed as a star talking through her life story to her chosen journalist, it comes over as a chaotic jumble of gossip and salacious titbits, where the only linear part is the order in which the seven husbands appear and disappear off stage. The emphasis on scandal (and Evelyn’s breasts!) ultimately leaves the reader overdosed with superficial relationships, drama-queen emotions, alcohol and sex, and a sense of being spoon-fed pages from a lesbian 101 book.
The first couple of chapters provide a good hook, but The Seven Husbands of Evelyn Hugo soon spirals into a story that leaves too many fascinating issues of mid-century Hollywood untapped or skimmed over in an apologetic manner. It overflows with clichéd writing and truisms. The plot is a little frayed and the main character is transparently Elizabeth Taylor. Unfortunately, the number of husbands is, in the end, just that: a number. Harry had a little depth, but the rest are shallow, never quite climbing off the page. In fact, the latter ones are utterly forgettable.
I could not connect with either of the main characters. Evelyn is not a likeable person. And she needed a kick up the posterior for her immature behaviour regarding the supposed love of her life. I couldn’t feel the least bit sorry for her losing her soulmate. She merited nothing better. There are some unforgettable and beautifully devastating fictional couples who are destined to separate: Scarlett and Rhett in Gone with The Wind, Laura and Alec in Brief Encounter… Evelyn and her amour are not among them and Monique is a rather dull means to an end.
The book would perhaps profit from cutting out a clutch of husbands who do nothing to drive the story forwards as well as chopping out some of Evelyn’s all-too-frequent references to her breasts. That said, this is an easy read, and one that, taken at face value, is entertaining.