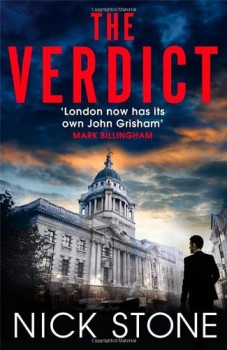 Terry Flynt is a struggling legal clerk with a big London firm of solicitors. His future could depend on a high-profile murder case – but he and the accused have past history.

Nick Stone's previous books had me reading them with every light on in the house. I still want to hide behind the sofa when I think of Mr Clarinet, a terrifying first novel set in Haiti with voodoo, black magic and atmosphere oozing from every page.

The Verdict is light years away from Haiti in every sense. Terry Flynt is bumping along as a legal clerk with a successful firm of London solicitors. He wants to be promoted and to do well for his family after a series of dead-end jobs – and he knows that this is probably his last chance.

Enter Vernon James. He's a multi-millionaire black businessman, accused of murdering a woman in a London hotel after being the controversial recipient of a top ethics award. The evidence is stacked against him and it's not looking good as his story has more holes than the England football defence.

Terry and Vernon have past history. They were childhood friends before something happened to turn them into sworn enemies. Terry isn't sure what to do – he needs this job, he needs the possible promotion, but he doesn't know whether he should declare an interest. And he's working on the case ahead of his sworn enemy Arabella at the next desk – and it's a high-profile one that could cover the firm in glory.

Stone writes with cold precision, whether he's focusing on voodoo or the dark streets of London. The Verdict is being plugged as a rival to John Grisham, which I wouldn't take any notice of as a recommendation. The least interesting part of the book is the courtroom drama. Where Stone flourishes is writing about back street bars and ordinary people who may or may not have something to hide. When violence flares, it's sudden and shocking.

Terry is an unusual hero. He's a 30-something working class lad and a strange mix of tenacious and doormat. He can look after himself, but he lets the annoying colleague eat his sandwiches every day and only reacts by spitting in them. A generous sprinkle of paprika or chilli would have headed that problem off at the pass! Most of the supporting cast don't register highly on the characterisation index, apart from an enigmatic private investigator who rubs Terry up the wrong way, and Christine, the terminally-ill barrister, who is spearheading Vernon's defence.

Ninety five per cent of the book is engrossing and spine-chilling. The final five per cent is a far too neat rounding-off list which gives a serious feeling of anti-climax after all Stone's previous graft. And once that dissatisfaction has registered, you realise that several threads which seemed vital to the plot were summarily dumped. I don't expect everything to be neatly tied up with a pretty bow, but one angle at least had the feel of having fallen down the back of the sofa.