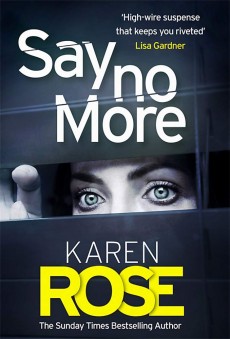 Mercy spent much of her youth in a violent commune but escaped when she was still quite young. Now her so-called husband from all those years ago wants her back. He is on the loose looking for her and will stop at nothing.

Mercy and Gideon, sister and brother, spent much of their youth living with their mother in a remote and cruel commune in the forests somewhere north of Sacramento in America. Their mother had helped both to escape at different times, although Mercy thought Gideon had just run away because he was lazy. Having settled and made a good new life for herself in New Orleans, Mercy is now on her way to Sacramento to make her peace with Gideon, about whom she now knows the truth.

On landing at the airport, Mercy is captured by her ex so-called husband, Ephraim, who is determined, no matter what, to take her back to the commune, known as Eden. Fortunately, she is being met by members of the Sokolov family, of whom Gideon is an adopted member. Rafe, who knows Mercy from an earlier visit, manages to save her from Ephraim, but it is obvious that he won’t give up.

The Sokolov family are the subject of many of the books by this author, each book focussing on a different member of the family, nearly all of whom are in the police, or the FBI, or some associated profession. Say No More focusses on Rafe, one of the younger sons who is currently still in a wheelchair, injured during a previous crime that also involved Mercy. The family is everything that embodies goodness in contrast to all the children’s professional experiences and it always provides a haven of calm and security.

A large part of the story is about the developing relationship between Mercy and Rafe. This follows a predictable course and indeed the amount of detail makes the book just as much a contender for a romantic fiction category as it does for the crime fiction category. The criminal aspects of the book, however, certainly do hold the attention and there is a high level of violence and threat throughout. The quality of writing in both aspects of the story is very fluent, and effectively demands the attention of the reader right to the end, despite the size of the book.

The book is once again written to the same formula as previous ones in the series, which unfortunately makes the outcome and many of the intervening scenes very predictable and it becomes very tempting to try to predict who will be the focus of the next book. A number of candidates have been set up here to be the likely focus. With a scenario like the commune and a family like the Sokolovs, with all their links to criminal investigation, then there is a mine of stories to unearth or invent, sometimes by working backwards to their origins, as in this book. It is testament to the quality of Karen Rose’s writing and plotting that these books continue to be so readable.