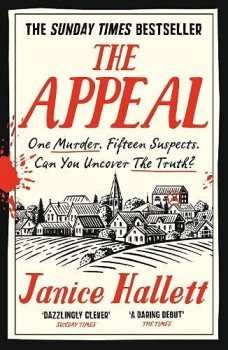 A murder has been committed and someone has gone to prison. But were they the right person? A QC uses the evidence to test his star pupils.

A QC presents written evidence to two of his star pupils to test their abilities, and to see if they can help him solve a case and put right an injustice. The reader is invited to solve the mystery in the same way as Roderick Tanner QC invites Charlotte Holroyd and Oufemi Hassan to assist him.

I have recently read a number of crime thrillers that make liberal use of text messages, emails and other forms of written communication, but this book is composed entirely in this way – there is no narration and no narrator. Instead, Charlotte and Femi and the readers are presented with a set of documents, linked together by messages between the main protagonists, which led up to shocking violence and a tragic death. As a result, Tanner believes the wrong person is now behind bars. And as he prepares for the appeal, he presents two of his star pupils with additional written evidence that came to light after the trial and the guilty verdict.

The title of the book, The Appeal, refers to the ongoing legal action but also to a major fund-raising campaign called A Cure for Poppy. The story is set in the small town of Lockwood, somewhere in middle England, where the alpha family of the Haywards rule the roost. They are the leading lights in the local amateur dramatic group, the Fairway Players, and they also own and run The Grange, an upmarket golf and country club.

When their little grand-daughter Poppy falls ill with a rare form of brain cancer they launch an appeal to raise a massive amount for a revolutionary, and as yet untried treatment, available only in the States. At the same time The Fairway Players continue to mount a production of All My Sons by Arthur Miller. Through their cast lists and committee minutes we are provided with a handy aide-memoir to who's who.

When two newcomers arrive in this incestuous and tightly-knit circle, the pecking order of the Fairway Players, the organisation of the fund-raising committee and the veracity of family relationships all come under scrutiny. And as rehearsals progress and funds mount up, then two themes of this story, the play and A Cure for Poppy, become increasingly entwined, resulting in a deadly outcome.

This is a highly original way of presenting a murder mystery. The characters reveal themselves through their written words and we have to rely on versions of the truth as others present it.  Although The Appeal is a compulsive read, it is sometimes also a hard read. There are no chapters, or many signposts and the organisation can be confusing. There is little or no breathing space as every page contains relevant information and demands the reader's full attention.

This is author Janice Hallett's first novel, inspired by her lifelong interest in amateur dramatics. And for a first novel it is a tour de force.