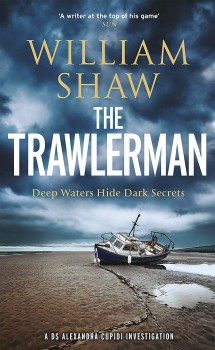 DS Alex Cupidi is on gardening leave, suffering from PTSD and panic attacks, an unwilling attendee at therapy sessions. When a couple are killed in a seemingly random and meaningless attack, the tangled case might just be a step too far for all those involved.

There are many things you can be sure of when you pick up a William Shaw novel to read. Most importantly, you know you will not be disappointed. His storylines and plots are careful and packed with loops and whorls that scoop you up and take you along at run. He has a fine eye and ear for character and dialogue, and with each novel comes the relief that you can just sit back and enjoy meeting up again with old friends, whose progress and prosperity you care about.

I very much enjoyed the time capsule that is his Breen and Tozer detective series and fell instantly for the current day DS Alex Cupidi series. Shaw moved his readers from cigarette-smoked 1960s London to spooky, faintly inhospitable Dungeness and the Kent coast without blinking, and I made the jump with him.

The Trawlerman sees DS Cupidi on gardening leave, suffering from PTSD and panic attacks, an unwilling attendee at therapy sessions, and totally unable to leave her colleague, Jill Ferrier, to carry the investigations without Alex herself. Ferrier is not as driven and talented as her friend and senior, so she finds herself being gently pushed by Alex to ask questions and follow leads that she might not otherwise have contemplated.

Gradually the many strands of the puzzling murder investigation plait themselves coherently together. What seemingly has no reason becomes clear, whilst ancient crimes, family relationships, Guatemalan reforestation and deep-sea trawler fishermen cease to be disparate bedfellows and answers finally slot into place.

Cupidi, a single mother with a drop-out and budding naturalist teenage daughter, has all the work/life balance problems that are so familiar to many. Her home life is full of trying to understand what is important in her daughter’s life, and what is happening to her own brain – including the dreadful nightmares that bloom with sleep.

Shaw investigates PTSD, and in a wonderful scene uses vegetables to explain the rerouting going on in the brain of those suffering from it. I learned a lot!

Cupidi’s arrow-straight attitude to crime and atonement takes a bit of a battering, and it very much looks like she is going to again bring down her friend and former police officer, Bill South. The first time she found him guilty he lost his job, his future and his pension. This time he will lose everything left to him. The question becomes whether she can she do it again.