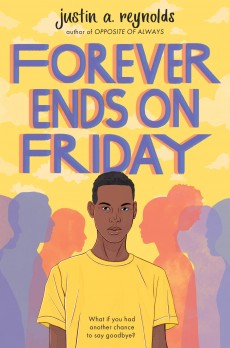 by Justin A. Reynolds

Jamal and Q used to be best friends until something came between them. When Q dies, an experimental procedure gives Jamal gives an unexpected chance to put things right between them. But how can he tell his friend that not only is he dead, but that he will also soon die again?

Jamal Anderson and Quincy Barrantes – usually known as Q – were best friends, doing everything together, knowing each other as well as they knew themselves. Then something terrible happened and Jamal blamed Q. Their friendship seemed to have been irrevocably broken, and for two years they behaved like strangers to each other. But when Q drowns in another awful accident, Jamal is desperate to repair what they had between them, but second chances like that don’t happen. Or do they?

When Q’s mother is offered the chance to bring her son back from the dead in an experimental procedure, she jumps at the chance to have more time with him, even knowing that she will have to lose him again in a few short weeks. She’s adamant that Q mustn’t know that he died, or that he’s going to die again very soon, but Jamal is less sure about keeping this from his friend. He wants to make things right between them, and he can only do that if he’s totally honest with Q, whose temporary reanimation is just too big a secret to keep.

Forever Ends on Friday is a poignant, haunting examination of the nature of friendship and loss. Forget the need to suspend disbelief. The ‘how’ doesn’t really matter although the question of ‘why Q’ does get answered, but even that is utterly secondary to the emotional punch this superb YA novel packs into every page. Jamal and Q are beautifully drawn characters, as are the supporting cast of Q’s mum and Jamal’s sister. Their interactions are well handled and always believable, despite the extraordinary circumstance that binds them all so closely together.

Justin A Reynolds doesn’t shy away from difficult questions and even more difficult choices and I found myself constantly putting myself in Jamal’s shoes, wondering what I would do faced with the same choices. As the story heads inexorably towards Q’s inevitable second death, the emotions ramp up to an almost unbearable level, but never become mawkish.

Reynolds has a deft touch to his writing and doesn’t lose sight of the fact that his main characters are two teenage boys, employing all of the sometimes dark humour that only the closest of friends can deploy without fear of offence. We see Q’s friends and family grieve for him, and that aspect is not glossed over, but this is also a tremendously uplifting book, and it’s one that I won’t forget in a hurry – nor would I want to.