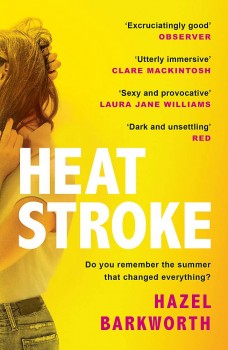 Lily didn’t get home after the girls’ sleepover. She didn’t even get there. She’s gone, and only three people know where.

England is turning to a crisp, even though summer has barely shaken hands with spring, even though the high school where Rachel works still pulses with the sound of teenagers.
With her husband working away in America, Rachel is virtually a single mum. But that’s okay. Mia, her 15-year-old daughter, and her friends are easy. For teenagers. The sleepover goes well, and the next morning the girls head off into town. A moment of peace, though the air is thick and limb-slowing.
Then Rachel answers the phone. And instantly, there is no oxygen left in the air. Mia’s best friend, Lily, has gone. She could have been abducted. She could be anywhere. She could be dead.
Only three people know what has happened.
And none of them are telling.
Heat Stroke is a box of cloyingly sweet chocolates, a bottle of dangerously heavy wine, an Aladdin’s cave-style shop at the wrong end of a questionable street. That first bite, that first sip, that moment when the bell on the shop door clangs, your senses ripple with pleasure. And it is fatal because you know you are going to regret it. Yet you can’t stop.
This book was my fatal journey of the year. I knew from early on where the story was heading. I knew I would close the book enraged, dirty, and full of regret for contemplating reading it. That didn’t stop me devouring it. I cannot decide if I hated Heat Stroke or loved it.
It may be classed as a thriller, but there is much more to this threateningly close to reality story. It is about Rachel, rendered vulnerable by her age and inevitable journey towards invisibility. It is about her daughter, who is on the cusp of becoming what Rachel fears she is leaving. It is bitterly believable in its portrayal of the knife wounds of words and actions that Mia and her mother inflict on one another. It is about tunnel vision and misunderstandings. It is about sex and control and manipulation. All are cleverly done.
Thank goodness for the past tense and third person point of view. It provided a little distance, though not enough to spare me from feeling as much a voyeur as Rachel, the dubious protagonist. She is refreshing, flawed, vibrant, and her character has a clear arc. I disliked her from the start and revelled in hating her at the end.
The author portrays Mia, a confused, hormonal teenager extremely well. The perpetrator may have no voice, but Barkworth succeeds in giving them legs and a heartbeat, even if they are slightly stereotypical. The rest of the cast is somewhat flimsy, but forgivably so, as much of this is about Rachel’s developing obsession with Lily’s disappearance and, as a result, the relationship she has with Mia going all the way to hell.
The milieu is secondary, but the weather has character, adding to the claustrophobic breathlessness of the story. There is a balance of introspection, action and dialogue that drives the story forward at a strong pace. The ending is definite, but without a single ribbon or pretty bow. It’s a wonderful change from ‘they all lived happily ever after.’
This is staggeringly well assured writing and plotting from a debut author. Heat Stroke is dark, disturbing, and toyed with my emotions.