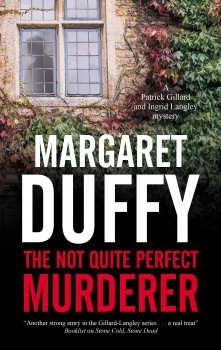 The Not Quite Perfect Murderer

The death of a small boy and a violent raid on a city jeweller’s pulls former spook Patrick Gillard and his author wife Ingrid Langley back into action to help out Bath police.

You’ve got to hand it to Margaret Duffy … Her main characters have always oozed middle class angst, but there’s scum at all levels in The Not Quite Perfect Murderer from lords and ladies to nouveaux riches to bizarre gangsters to the bottom feeders.

The Not Quite Perfect Murderer is a very long way (23rd, to be precise) into a series that may well have passed you by. I don’t even remember how I came across Duffy, but the faintly eccentric saga of a crime-fighting married couple Patrick Gillard and Ingrid Langley – one a former soldier and the other a novelist – still intrigues me, mainly because of the unconventional lead characters.

In the past they’ve worked for a veritable alphabet soup of crime-fighting agencies. Patrick is now doing insurance investigation as a side-line and – reluctantly - occasional spooks work, as he thinks he’s too old for all the gallivanting. He’s moved back from the more active stuff because of his and Ingrid’s tribe of kids – there’s a stark line about the kids not wanting a father six feet under and the adopted ones (the offspring of his late brother) a second father six feet under. Ingrid, meanwhile, is trying to write alongside corralling the sprogs with the help of a nanny and Patrick’s thoroughly sane and sensible mother.

The book has a faintly shambolic air to it with multiple narrators (and a rather laissez faire attitude to point of view). It’s kind of appropriate, given the plot, which meanders around Bath and Somerset and features a small boy being killed after shinning up a tree to see what’s going on in a house, a range of cartoon strip gangsters distinctly lacking in morals, plus a violent raid on a jeweller’s in the city and burglaries at posh houses. Unusually for Duffy, there’s no haring off to London for nefarious investigations.

The stories have always worked better in Ingrid’s brisk, no-nonsense voice. This one is mostly relayed by Bath DCI James Carrick, a series character and the stereotypical dour Scotsman (note: having him say ‘I ken’ periodically isn’t a substitute for broader characterisation!) So having most of the book through his eyes is a bit dry. He breaks his leg playing rugby early on, so there’s lots of hobbling around on crutches, convenient visits to hospitals to help the plot along, and more angsting from a bloke of a certain age as to whether he’s too old to be chasing funny-shaped balls around.

Speaking of ages, we finely get a clue as to how old Patrick is – that’s been one element that I’ve wondered about all through the series. Somewhere in his 40s has always been my guess. Apparently he has got his army pension so must be at least 50, thinks Carrick – although you’d expect good friends who’ve know each other for years to have a more accurate idea how old the other is! Maybe you never ask a gentleman his age …

Duffy likes strong female characters, which makes it ironic that Carrick’s cop wife Joanna is underdrawn as well – although we’re told she has a good right hook! The highly capable and newly promoted DI Lynn Outhwaite and Ingrid spend rather too much time in the background this outing, although some riding in of the cavalry is required to rein in overzealous spouses and bosses.

The plot doesn’t bear too much poking and nor, I suspect, does the accuracy of the police side of things – I’m certain that police forces’ maternity leave rules mean Joanna would have been able to come back to her previous rank, although clearly that’s not so convenient for the series! Duffy has her usual leftfield cameo characters – I liked bemused university graduate cop PC Roderick Morris who finds himself roped in to some of Patrick’s madder stunts. I predict we’ll be seeing more of him!

The Not Quite Perfect Murderer is a perfectly enjoyable read if you’re a fan of this eccentric series – it will undoubtedly have newcomers wondering what sort of bizarre party they’ve joined late. But it’s all rather a mish-mash and in need of a tough edit to stop the rambling and straying points of view. As for the final few paragraphs, I spent about a minute trying to swipe on in the e-book, convinced there was more to come. There isn’t. But then Duffy has past form for ending on a jaw-dropping cliffhanger …