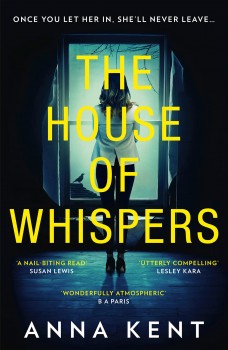 The House of Whispers

Grace is back in Abi’s life, dripping toxins into an already fragile status quo.

Abi and Rohan are in a good place, but not the best place, because Rohan must leave their London house and work in New York for a few weeks. And Abi doesn’t want him to go. Then her one-time university friend, Grace, messages Abi from out of the blue, saying she is returning to England after a long stint in Australia.

Abi is torn. Grace is the person who pushed her into painting. She is the reason Abi became an overnight success with her first exhibition. She is, in a way, her muse. But she is also a toxic insidious parasite who for years drained Abi of money, of boyfriends, of self-respect, of her independence.

Letting Grace back into her life is fraught with risks. Abi does not want to go back to those days. She doesn’t want Grace to steal Rohan or her own sanity. But she is also, between glassfuls of wine and vodka, a realist. Abi needs her muse for an imminent exhibition for which she has not done a single painting.

Abi relents and invites Grace to stay while she finds a place to live. This is much to Rohan’s relief. After all, he was worrying about leaving his beautiful, fragile wife alone, but if she has a pal coming to stay, he can leave with a clear conscience.

If only he knew.

Oh my, does this story suffocate the reader from the first page. It may not be the fastest-moving plot in the first instance, but the senses-rich description bubbles so wonderfully with a dark, haunting atmosphere that one forgets the pace.

Though there are transcripts of an interview with Rohan, the majority of the chapters are in the first person, from Abi’s point of view. Rohan gives little away in his interview but teases the reader with indications that something terrible has happened. What, and to whom, by who, he does not say.

Abi, an artist with a drink problem, and the main point of view, is clearly an unreliable narrator, a misleading protagonist. She is more than flawed. She is, at times, narcissistically self-absorbed, at times desperately generous with her already brittle heart. She could so easily be the kind of character that I find difficult to connect with. But viewing the world through her artistic eyes, being party to her introspections and justifications, and sensing her fight to stay afloat in the heart of her overwhelming family of in-laws, she is someone I invested my emotions in from early on.

Grace is utterly vile. She is vicious, snidey, a predator, a leech. But she is alarmingly familiar; the person we have all endured at some point in our lives. The one who takes over, and who will not be satisfied until there is nothing left of her prey. Yet she is also charismatic, and she is an obsession, a fix, a drug.

The author, unlike many, has given honour to her book’s title: the backdrop truly is a House of Whispers. The Victorian semi is a fully blown character - brooding, menacing, yet at times enveloping the protagonist with safety and love.

It is difficult to touch on the plot without giving too much away. Suffice to say, from the first lines, one sinks into a dark tunnel that clearly is going into the bowels of the earth with no way back. This is a beautifully written book for psychological thriller fans.