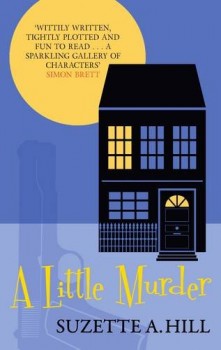 by Suzette A Hill

Rosy’s Aunt Marcia is found murdered. Rosy was not close to her and despite her best efforts to keep out of the fuss she inevitably gets drawn in.

Marcia is found shot with a coal scuttle placed over her head. She appears to have been an interesting character with a colourful past, very different from her niece Rosy who has a respectable job at the museum. From her experience of her aunt’s life, Rosy feels that it would be prudent to keep out of the way of any investigations. But this course of action soon becomes impossible and her involvement seems to put her own life in danger.

Rosy’s acquaintances are all seemingly eccentric, from the flower-arranging Felix to the artist Clovis. And Vera Collinger seems positively driven about something. Indeed, all the characters have interesting backgrounds and play their part in the unfolding story with great aplomb.

The dialogue allows them to demonstrate wit and humour and as the book progresses some of their thoughts become increasingly perceptive: ”righteous and meddlesome people – in their way they can be quite ruthless, the sort who foul up life for others.” It was worth reading the book just to encounter this truism.

Rosy in particular is portrayed with a lovely, dry sense of humour. Her observations and thoughts about Vera and her dog, Raymond, are just exquisite. Similarly when she almost literally stumbles on another murder victim, the situation is chilling, but any nastiness is ameliorated by the humour, the headless body ending up in a deckchair on the south coast!

On two occasions Rosy is surprised by strangers who call on her after dark, and in each case her thoughts are a wonderful commentary on the incongruities of life. The plot itself is an intricate weaving of time, things that happened in the second world war being unresolved, even now at the time of the story in the 1950s. Indeed, some characters were so affected by events that their lives are still dominated by the memories.

But Rosy only has rumours to go on and her aunt’s way of life in those days is a mystery to her. However she suspects enough to realise that staying out of things is her best option. This seems also to be the view of others such as the mysterious Latimer who has hopes of high reward some day. Remarkably in such an old-fashioned atmosphere no clue is given as to who might be the culprit. Many characters have motive but the final denouement has to await the final pages, providing a tidy and satisfactory end to all aspects of this complex plot.

It would be interesting to know who the target audience might be for this book. It is well-written, amusing, genteel and sedate – a pleasant antidote to the violence and aggression of some of the more modern crime fiction.