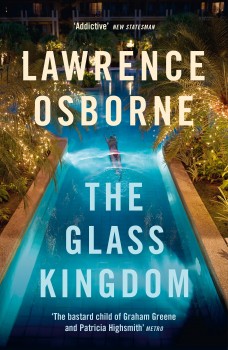 After defrauding her New York employer, Sarah takes refuge in a crumbling tower complex in Bangkok. The people she meets seem friendly, but she has the impression that someone is watching her.

When an aging US author authorises the sale of her correspondence with celebrities, her young factotum visits a purchaser in Hong Kong, and takes the opportunity to pass off a few forgeries of her own. With the $200,000 fraudulently obtained, she flies to Bangkok and goes to ground.

Her choice of accommodation is a flat in the Kingdom apartments, an estate of multiple high-rise towers built some 30 years ago for the wealthy elite but now beginning to crumble. Half the flats are vacant, and the remaining occupants range from those once rich but now trapped by economic collapse to a variety of dubious characters, including foreigners in temporary employment.

Sarah, as she calls herself, is first wary of strangers and sensitive to the impression that she is being observed, fearing that someone who knows about her fraud is after her. After several days of isolation, however, she responds to overtures of friendship from three other women in the Kingdom, particularly Mali, a half-Thai girl who she takes into her confidence.

Despite a deep-seated distrust of the people around her, Sarah is unable to resist offering help when Mali turns up one night with a serious problem. As it turns out, Sarah is correct in her assumption that she is under scrutiny, but not arising from her fraud as much as from opportunists now around her who spot a tempting mark. She is quickly enmeshed in a trap which she is ill-equipped to tackle, leading to the most grim outcome imaginable.

This is an unusual crime story which keeps the reader guessing about its direction until fairly late. The depiction of the Kingdom builds slowly to create an impressive atmosphere of distance and alienation, half-empty towers linked by dusty walkways where it is easy to spy on others. The author feeds in oddities about the place, peculiarities of Thai culture and religious belief which reinforce the sense of strangeness.

The exclusivity of the Kingdom keeps the outside world at a distance, so that the civil insurrection and political turmoil in progress on the streets outside are experienced merely as echoes. Even the increased frequency of power cuts, so that residents have to experience the heat and humidity in candlelight, merely adds to the feeling of languor and acceptance which Sarah seems unable to escape.

Sarah’s initial actions may strike some as difficult to credit: to make such a desperate step for a minor fraud with resources sufficient for only a relatively short-term concealment seems very rash. Her behaviour thereafter is more consistent, with ill-thought-out and hasty decisions showing evidence of mental confusion. The impact of the Kingdom is powerfully described to make the ending all too convincing.