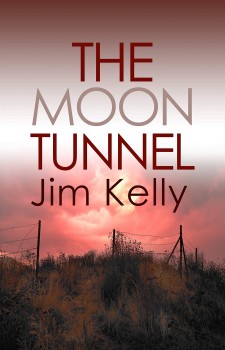 A body is found in one of the escape tunnels dug by POWs held in a World War Two camp in Cambridgeshire’s fenlands. Journalist Philip Dryden is drawn inescapably to the case when it is revealed that the man discovered in the collapsed tunnel is on the way into, not out of, the compound.

The Moon Tunnel is the third in the Philip Dryden series reissued recently. For anyone who has been caught up in Jim Kelly’s Night Hawk series, set in Cambridge, the re-appearance of these three books will be both a treat and an adventure.

Kelly has a very neat turn of phrase that is a delight and Dryden, the central character, is complex, carrying as he does a shoulder full of both guilt and unhappiness. His life carries echoes of the ghastly car accident which put his wife into the hospital five years previously – from where she has not emerged. Her brain and body are shut down, only wakening achingly slowly.

Dryden tossed in his job with a Fleet Street newspaper to write for a local paper and he lives on an ancient boat. We get the impression that he is punishing himself for the accident and often his thoughts reveal that this is not the life he wants, nor is the looming future. He doesn’t drive any more and the equally complex relationship that he has with Humph and his gently collapsing Capri is tender and a kind of lifeline. Humph is one of the most unhealthy men imaginable. His diet is appalling, and he never takes exercise, so he is a health time-bomb, but he drives continually for Dryden – at all times of the day and night. It seems that neither sleeps well.

There is a police presence in the book, but Dryden seems to manage his investigation well enough without them. When the body is proved more recent than the wartime one found first and following leads into the Italian community still living locally, family relationships, looting and the black market start to feature more heavily.  Add in an ancient, left-leaning aristocrat and a missing painting that will keep her out of poverty, and we are away and into a wonderfully involving adventure.

Ely and the Fens are as much characters as any of the people in the book: the good and the bad, the guilty and the greedy. The Moon Tunnel is surprising, delighting and revealing.