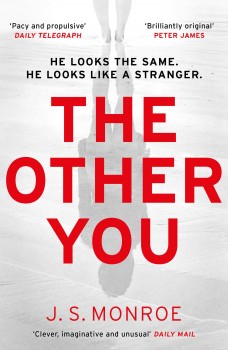 Kate may have lost her outstanding memory for faces, but she is certain the man in front of her is not the man she loves.

Kate is lucky to be alive, let alone living in a luxurious house on the Cornish coast with a too-good-to-be-true boyfriend. A year ago, her 12-year relationship with Jake was struggling in its death throes. Six months ago, the night their relationship took its last breath, Kate almost lost her life in a horrific car accident.

Now, little darkens her day, other than her accident's legacy of losing her ability to remember faces and paint their portraits. So of course, she can no longer work for the police as a super-recogniser. She does not care, because Rob, her super-rich, techy boyfriend, gives meaning to her life.
Until the day she looks at his stunning face and realises it is not him.

Psychological thrillers are up there with sliced bread, so a journey with fresh - if not original - bonuses of doppelgangers, super recognisers, facial recognition, and a bite-size amount of technology had me chomping at the bit.

Unfortunately, after a promising start, I found much of this story far-fetched and implausible. A look-alike is not a clone. That Kate is not sure if the person talking/kissing/sleeping with her is her boyfriend of six months, gives her a strong air of stupidity. I am hopeless at recognising people, but even I would know if the man in front of me was my partner or an imposter, because there are many indicators other than visual that we refer to when identifying people.

The sub-plot involving the drug-dealing Connor and his DI father, Silas, is distracting, pace-slowing and does nothing for the story. Worse still, it highlights the already unbelievable incompetence of the police.

Kate is an unconvincing character. She spots anomalies, inconsistencies, and dubious behaviour, but kow-tows to her entourage and acquiesces at every turn like a stupid and spineless Disney maiden in distress. Then at the end, she belatedly grows a pair.

Rob is condensed milk with a side order of creep. But like the other characters, he is one-dimensional, and they all carry neon signs, saying goody or baddy. His doppelganger story is a mess with more holes than a kilo of gruyere.

The main problem, however, is the book’s length. With good editing, the pacing would have hit top gear, because hopefully all the tautology and about 100 pages would have had the chop. It infuriates when characters think something, share it and share again, each time without leaving any of the detail out.

Superficial information is repeated so often in ‘tell’ form, particularly that Kate used to be a top super-recogniser. She helped capture lots of criminals, and one or more of them might be out for revenge. She could be in danger. And maybe her accident had not actually been one. Your readers are not stupid, Mr Monroe.

There is much preamble and set-up, combined with a lot of luck and questionable coincidences. The pay-off is small because of glowing red herrings and flaccid twists. The technology, although a bit far-fetched at times, fits the story.

Each time I read a Monroe novel I hope he will not give my suspension of disbelief more unbecoming stretch marks. I hope in vain. But here is the twist. Despite the moans above, I thoroughly enjoyed the easy-read escapism of The Other You. Monroe could yet become my guilty pleasure!