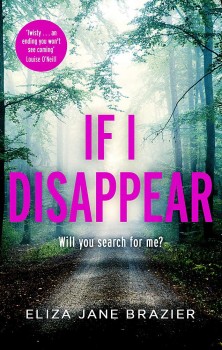 Sera’s obsession with missing podcaster Rachel Bard is about to become a journey into the wild where only death is a certainty.

Sera Fleece is in limbo, emotionally and literally. Divorced, jobless and, it seems, friendless, she has become the veritable couch potato, spending all her waking hours listening to her favourite podcast, Murder, She Spoke, that examines cases of missing women. Rachel Bard is its outspoken host.

Without warning, the podcast stops. No new episodes. No word from Sera’s virtual friend. Rachel’s social media has no new updates. And Sera is sure she has become one of those about whom she talks – a missing woman.

Sera, convinced she knows Rachel so well because of her obsessive relationship with the podcast, decides she must find her. Sera is now on a mission, and retrieving what she believes to be hidden clues, hints and tips entwined in the dozens of stories, she sets off to the northern backcountry of California, where Rachel lived with her family – Fountain Creek Guest Ranch.

Sera meets Rachel’s parents under the guise of looking for a job on the ranch. Even before she is through the gates, she starts her investigation with dangerously maladroit questioning. Soon she has a list of suspicious people, and it is clear that Rachel has enemies in every corner of her part of the backcountry, each one with a motive for making her disappear.

There are so many people with stories and skeletons they would rather keep buried. But one of them knows that Sera, the inept and indiscreet investigator, is little by little closing in. Soon she will stumble on the truth, if the killer doesn’t get to her first.

This is Eliza Jane Brazier’s debut novel, a move away from journalism and screenwriting, and unsurprisingly it starts with force and a sense of individuality one expects from a seasoned writer. Unfortunately, part way in, it does turn into a Sunday afternoon ramble with much repetition and floundering on Sera’s part.

It is written as if Sera is writing a letter to Rachel; a foggy, one-sided dialogue with a nonexistent second person. I am not a fan of the constant second person referral. It isn’t clever or unique, but fashionable. “You” grates and keeps me on the surface rather than submerging into the story. I am not Rachel Bard.

Sera, though in her mid-30s, comes across as much younger, an immature and naive character. Her obsession with Rachel is, though, necessary for the plotline, if over the top. It needs more back story about how that came about. It would have made her character more understandable and relatable if the author had offered a deeper insight into her history rather than sprinkling the story with random, hazy references to a miscarriage and a loveless marriage. As she is, the woman annoys and evokes no sympathy

However, it is definitely an interesting read. Brazier's writing has much to like, particularly her senses-driven descriptions of the ranch and surrounds. Her characters are unique and memorable, perhaps a little too caricatured at times. Unfortunately, there are several plot holes, the behaviour of certain characters is never explained, and most of the story requires a hearty cord to suspend one’s disbelief, particularly the unconvincing ending.

That said, If I Disappear is a book that those who like mystery, shady and quirky characters, horses, and books that incorporate podcasts will gallop through in one sitting.