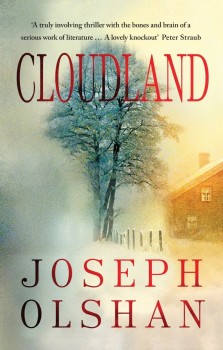 An isolated Vermont community is disrupted by the past when a serial killer strikes.

Cloudland is a lonely place. Just three households live on this hill in upper Vermont. In winter it’s cold as well as isolated. The same could be said of the novel’s heroine Catherine Winslow, who’s lost her husband and is estranged from both her daughter and her most recent lover. When Catherine finds a dead woman, the most recent victim of a serial killer, in the thawing snow, only her dogs and pot-bellied pig are there to protect her.

The police are not forthcoming with details of the investigation. Fortunately, Cloudland’s also home to a forensic psychiatrist who’s been asked to work on the case and is conveniently happy to share his progress. The complications ramp up when Catherine’s ex gets back in touch and she realises her link to the killer’s modus operandi.

Despite much back-story, Winslow doesn’t have much depth as a character. Even though Catherine is written in the first person, it’s hard to get inside her head. There’s a dreamy detached nature to what she says, and she is strangely neutral about the way her neighbours, daughter and former lover behave. Perhaps that’s her way of coping.

Of course, Olshan may be deliberately portraying Catherine as self-contained and hard to know; perhaps she’s been damaged by her past. She doesn’t share confidences with any close female friends, associating mainly with her male neighbours and a female colleague she doesn’t much like. The gossipy nature of the small-town community nearby does little to help – another addition to the novel’s atmosphere of cold and isolation.

That said, the pacing is good and the complex plot twists and turns, keeping you gripped until the end as your suspicions lurch from one character to another. Olshan has lots to say about love and family in all their forms – whether good or bad – and along the way touches on religion, regret and the impossibility of changing what’s already done.

Perhaps Cloudland is one to read when you’re curled up cosily by the fireside in the middle of a city or surrounded by large pet dogs. It's definitely not to be consumed if you’re feeling cold, lonely or lost.

Liza Kahlua is a writer based in Bristol. She enjoys reading a wide range of fiction, as long as it's not too gruesome.