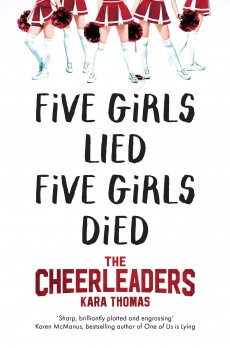 Monica has never believed that her sister committed suicide, and she’s equally certain that the truth has never been told about a double murder and a car crash that shocked her home town to its core five years ago.

The small American town of Sunnybrook has no cheerleaders, and no vampires, either, so it’s not to be confused with Sunnydale, home of the famous fictional cheerleader (and vampire slayer) Buffy Summers, although Sunnybrook does have its fair share of demons of the non-magical variety.

The reason for the lack of cheerleaders in Sunnybrook for the past five years is that five girls on the cheerleading squad died one after the other in a summer that rocked the town to its foundations. Two girls were murdered, two died in a terrible car accident and one committed suicide.

The last of the girls to die was Jennifer, Monica’s sister. Monica has always struggled to come to terms with her sister’s death and, in the absence of a note, she has always believed there was more to her sister’s death than suicide. Monica, 15, lives with her mother and stepfather, Tom, a sergeant in the local police department, and ten-year-old brother, Petey, who Monica refers to as their ‘oops baby’.

Monica is desperate to earn a place on the school dance team, so much so that she doses herself up with painkillers to dull awful stomach cramps rather than take any time off. Her mother’s lack of sympathy and comment about hoping her daughter learns from the pain provides the clue that Monica might well have taken steps to prevent having an ‘oops baby’ of her own, and I presumed that with her mother’s knowledge, she’d taken a morning after pill. To make matters worse for Monica, the man she had a brief relationship with is now the school’s new cross-country coach.

Monica is likeable and tenacious as she delves deeper into what she sees as the inconsistencies in the official version of what happened five years ago and she starts to gradually pick holes in the various stories, until things begin to unravel around her. As she learns more about the murders and the car crash, she even starts to wonder whether her own step-father knows more than he has ever said, and these suspicions only intensify when she discovers he still has Jennifer’s old mobile phone. From that point on, Monica has no idea who she can trust, but she does discover unlikely friends and even more unlikely allies.

Kara Hunter paints a convincing picture of a town that has ostensibly moved on from its grief, even though it still simmers below the surface, ready to break out when cracks start to appear in the carefully constructed façade. The teens and adults are all, in their different ways, likeable, and there are no obvious suspects.

Jennifer’s own story is interleaved with that of her sister, with Monica’s told in the first-person present tense with all the sense of immediacy that brings, and Jennifer’s told in third person past tense. As a stylistic choice, the latter works well, providing a degree of distance from the past, and a level of objectivity that Monica perfectly reasonably lacks. The juxtaposition of the two is never jarring and I was able to switch comfortably between the narratives.

The Cheerleaders is anything but predictable and the ending took the story in a direction I hadn’t expected. Monica’s search for the truth is at times funny and fast-paced and at other times introspective and poignant as she seeks to lay the demons of the past to rest and move on with her life. There are no stakes through the heart and showers of dust – remember, this is Sunnybrook, not Sunnydale – instead there’s a well-crafted, very satisfying teen murder mystery with sympathetic characters and a great plot.