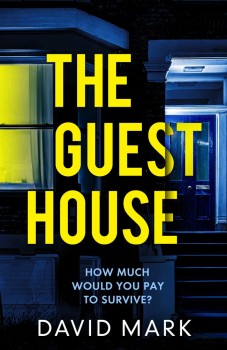 A single mother running some rooms to let becomes unwittingly involved with local – and not so local – gangsters, shattering her fragile peace in the remote Scottish Highlands.

Ronnie is a smart, beautiful single mother of three, plagued by doubts about life and the future after having ousted her husband for infidelity and very publicly burned his clothes in front of the house.
The small family live in a remote part of coastal Scotland. To get some money flowing in she has started running some holiday lets and is discovering that sometimes guests can be more trouble than they are worth. One of the tenants is an ill man; that is clear, but there is something about him, and a fire in his eyes that is strange for someone so obviously unwell. He seems kind, though, and is good with the baby of the family.
Ronnie has started seeing the mysterious Bishop, but it is not a comfortable relationship – he is a bit of rough, in contrast to her husband’s smooth. So she is not that worried when he suddenly drops out of her life.
Running in the background to this, a London-based crime agency is hunting deeply, darkly bad people … and they seem to have arrived in Ronnie’s neck of the far-flung woods, shattering her fragile peace in the remote Scottish Highlands.
I was nearly 100 pages into the story when the true nature of the plot really started to kick in. Until then I thought that the chameleon talents of David Mark had quietened, and the book was going to be an easy read. Ha! I really should have taken more note of the prologue.
David Mark knows the area and he amply delivers the wildness of the Highlands, the weather and the people. As he remarks in his author’s note, it would be a bit bloody worrying if the events he creates are really going on up there. I recommend having a stiff gin sitting by your side when you read The Guest House. It really is quite a ride.