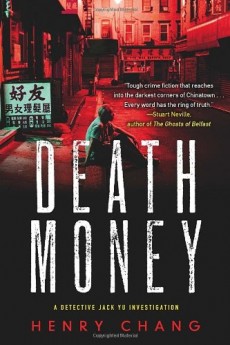 Detective Jack Yu investigates the death of a young Chinese man and finds a connection to one of the most powerful men in Chinatown.

When a young Asian man is found floating in the Harlem River, New York detective Jack Yu’s ethnicity is enough to get him assigned to the case. The dead man has little in his pockets, but a few pencilled phone numbers of Chinatown restaurants give a place to start, and before long Jack establishes that he worked for the gang-related owner, ‘Bossy’ Gee.

The dead man, Sing, was one of an army of illegals working in a menial capacity in Chinatown, and it seems odd when the cause of death is shown to be a stabbing. Clearly Sing has upset someone, but just how is unclear. Jack’s initial thought is a dispute over a gambling debt, but that seems unlikely. Jack shuttles around Chinatown talking to anyone who knew Sing, and gathering background about the Gees, and eventually Jack makes the connections necessary to crack the case.

Death Money is permeated with the life of Chinatown, and has a very distinctive flavour. Cultural characteristics remain very strong even for those Chinese, like Jack, born in USA. So while Jack is integrated into a Western police force, he eats and thinks Chinese. He favours a Chinese way of breathing, uses Chinese medicines for his aches and pains, and even consults a Chinese seer to pick up resonances from Sing’s possessions. Chang lards the book with the Chinese version of common terms for foodstuffs and close relationships, and underlines Jack’s sensitivity to the nuances of language and behaviour of the different parts of China from where the immigrants come.

Even more important for his case, Jack understands how things work in a society where Western institutions have limited impact, and power is controlled by various shadowy crime organisations into which police radar doesn‘t penetrate very far. As in other minority societies, individuals are reluctant to confide in authorities that they see as essentially alien, and this leaves them vulnerable to those in their own community who prey on human weakness for gain. Jack’s trawl for information takes him to the seamier side of Chinatown, where the Triads exploit the Chinese belief in luck and enthusiasm for gambling and the loneliness of men with little opportunity for regular relationships.

One rather odd feature is the fairly late revelation that the action is set in 1995; it is not clear why the author should have gone back 20 years for his story – perhaps modern Chinatown is more integrated and thus less culturally distinct than it was.

Detective Jack Yu is certainly a cool character, with a dedication to his task, a steady hand, martial arts skills and empathy for his compatriots. His travels into the depths of Chinatown are both interesting and revealing. For those who enjoy Death Money, there are three previous Henry Changs with more fast action in a singular arena.