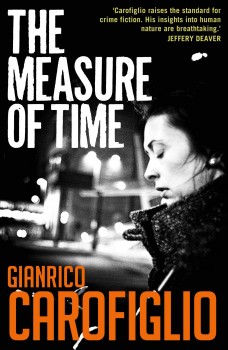 The Measure of Time

Italian lawyer Guido Guerrieri is contacted by a girlfriend from his distant past  She believes her son has been wrongly convicted for murder. Guido has to decide whether it’s wise to take on the appeal.

Guido Guerrieri is an experienced lawyer approaching retirement, working in a law firm in Bari, Southern Italy. He has three close colleagues, two of whom have their own detective agency, and one of whom may be his girlfriend. He lives on his own and uses a punchbag to let off steam! When he is approached by an old girlfriend who believes her son Iacopo has been wrongly convicted for murder, he eventually decides to take on the case because Iacopo’s original trial was conducted by a lawyer whom he knew at the time to be ill and who has subsequently died. He could tell from the records of the trial that corners had been cut and that Iacopo may not have been best served by the dead man.

The character of Guido is well developed. He comes across as a gentle and thoughtful man, a lover of good food and friendship. He reflects very thoughtfully on his early years as a trainee and on his relationship at that time with Iacopo’s mother, Lorenza. Although, initially, he fails to remember much about her, details of their time together gradually resurface. The other characters are Iacopo’s friends, local young men dabbling in drugs, on the edge of the criminal world. These are perfectly portrayed as they would be seen in the local area in which they live. Guido’s colleagues remain mainly unseen and undeveloped in the background, just doing their jobs.

Right from the start there is a wonderful depth to the writing. Guido often reflects on life and goes off tangentially on an interesting line of thought that arises from the story but which makes the reader pause and think. In one chapter, On one occasion, Guido gives a lecture to some students, ostensibly about investigations carried out by the Defence in a trial, but actually about things such as dilemmas; different ways of seeing things; moral values and their hierarchies; the plurality of points of view; historical perspectives; decision-making; fallacies and predictions. All is discussed with the lightest of touches. Author Gianrico Carofiglio was once a highly respected prosecutor in Southern Italy, where the story is set. His knowledge and experience shine through and give the book a dimension over and above much contemporary crime fiction.

The story develops apace and the eventual appeal hearing is quite gripping as the different possibilities of events become apparent. It is unusual to relate the events of a murder from the perspective of the future, but there is just as much detail and emotion as there would have been if it had been told as it happened. It makes a refreshing change to focus on this aspect of the criminal world. The book is well-written, full of interest, and thoroughly enjoyable. It is also extremely well translated, and brings to English readers the work of an award-winning Italian novelist.