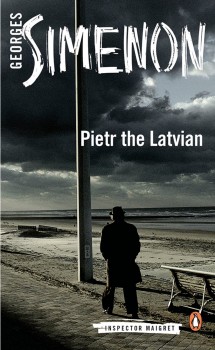 Inspector Maigret observes an infamous criminal arrive by train, but uncovers a puzzle when the man’s double is found dead in his carriage.

Pietr the Latvian is Simenon’s first Maigret novel, but the detective emerges convincingly developed in mid-career, with Mrs Maigret already installed at home preparing delicious dishes for his return. The book begins with Maigret waiting for a train, having been informed that a notorious criminal, the eponymous Pietr, is on board. He sees Pietr arrive but a double is found in his vacated carriage, murdered.

Maigret puts Pietr under close observation, with difficulty since he is hob-nobbing with the jet-set and moving in circles where Maigret’s proletarian figure makes it difficult for him to blend in. The pressure makes someone nervous and lethal attacks are made on the police; Maigret himself narrowly escapes death and is badly wounded. He doggedly refuses to be put off, however, and once he has deduced certain vital clues, the answers to the mystery are not long delayed.

Written in 1930, this story is now well over 80 years old and of course certain details – the sending of written messages by hand, Maigret’s bowler hat, the coal stove in his office – reveal its age. Certain elements of the plot also appear rather dated: Pietr the super criminal operating largely independently, for example, and it is difficult to see modern detectives shadowing suspects for days at a time on foot in the foulest of weather. But in other ways, the story feels remarkably modern. In particular, the detective’s keen observation of detail, his quick grasp of the need for action when necessary, and the inexorable drawing together of the threads to the final reveal are all common features of contemporary crime.

Simenon does in fact reveal the key to Maigret’s approach: while using the latest tools of forensic science, ‘what he sought, what he waited and looked out for, was the crack in the wall … the instant when the human being comes out …’ This is further developed in later books where it sometimes seems that Maigret’s method mainly involves assimilation of atmosphere. Once he has fully absorbed the way of life of those falling under his gaze, seemingly inconsequential details lead the detective to the correct understanding of events. The approach also implies a recognition of the pressures the criminal has been subjected to, and a surprising empathy for his quarry.

Together with Sherlock Holmes and Poirot, Maigret is one of the best-known fictional detectives, and deservedly so. The man himself, heavy, stolid but dogged, feels absolutely true to life, and the books build up a picture of the lives of both the bourgeoisie and petty criminals in inter-war France in a way that give them a strong claim to literary merit. This may not be the best in Simenon’s canon, but if only because it was the first appearance of the famous detective, it deserves a look.