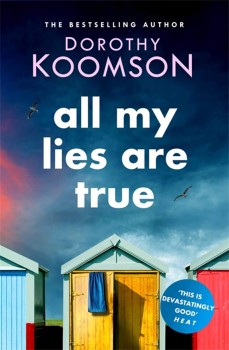 All My Lies Are True

Lying is in our DNA. But Verity’s lies are about to land her with a charge of attempted murder.

Verity is falling in love with the one person she shouldn’t. On the surface, there’s not to be worried about. He’s not married. He’s not a criminal. He’s not the guy old enough to be her father. But he is the man who showed Verity that her perfect mother is a liar, and maybe the ‘Ice Cream Girl’ who got away with murder.

Serena is the ‘Ice Cream Girl’ who didn’t serve time. Open the door to her home and you’ll see the glow of a warm and loving family. But open the door into Serena’s heart and you’ll find it is weighed down by lies, guilt, and a fear that her life could all fall apart. Again.

Poppy was found guilty of murder. She became part of the prison furniture for 20 years. Now she is a mother with an ex who clearly loves her. But her lies continue to haunt her. And they will do so until she finds out the truth.

This is my first journey with Dorothy Koomson and hopefully it’ll not be my last. She has an easy style of writing, despite a few confused and clunking sentences, and there’s a depth to her characters that brings them to life. Koomson gives them flaws, warts and redeeming features, making them likeable and offensive in equal measure.

When I read All My Lies Are True, I was not aware that it was the sequel to The Ice Cream Girls, published in 2010. Although Poppy and Serena’s story from the 1980s intrigued me, and I instinctively wanted to know more, this book is perfectly able to stand alone. There are plenty of references to the earlier story to fill in any gaps, though at times the backstory did slow the pacing.

However, I am sitting on an uncomfortable fence. Despite how convincing the main characters are, the backstory is questionable, and this affects the plot, in places creating holes. I felt that some legal aspects of the previous book that come out in this story are utterly unconvincing and overly misogynistic. They smack of the 1970s or earlier. Not the 1980s.

That no-one, including Poppy and Serena’s parents, noticed changes in their behaviour, or bruises and broken bones (including multiple rib fractures, which, believe me, are difficult to hide) is hard to accept. That the judge and jury swallowed the portrayal of the predatory teacher, Marcus, as a gentle soul and the girls as evil when he'd been abusing them since they were 15, makes a mockery of the British legal system. That not a single detective questioned the predator’s ex-wife (yes ex-wife – flashing neon light, why was he an ex with a restraining order against him?) about his character, portrays the police as utterly incompetent. Yes, miscarriages of justice and police incompetence do happen, but I found this all rather unconvincing.

The sheer number of abusive relationships in this story is overkill. They detract from one another and turn what is a truly shocking theme that we should all fear into something commonplace, almost mundane.
The true criminals from this and the first book are disappointingly obvious from early on. If the characters and complex relationships had not been so fascinating, I would have shuddered at the thought of reading something of this length for an expected reveal. But for all my reservations, I did enjoy the book.