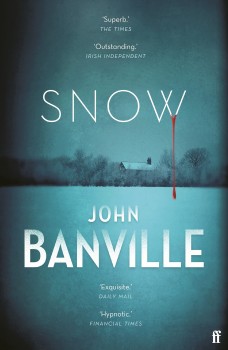 Detective Inspector St John Strafford is called from Dublin to a country house where a priest has been savagely murdered. As the snow piles up, he struggles to understand the strange family who live there.

DI Strafford arrives at Ballyglass House, home of the aristocratic protestant Osborne family, in the winter of 1957. It is bitterly cold, and the house has only open fires, and few of those. As with many old families in Ireland, lack of funds for a prolonged period has meant no maintenance on the house, the grandeur of which has given way to damp and decrepitude.

The reason for his visit is the death of a regular visitor, ‘Father Tom’ Lawless, who was stabbed in the neck late one night, and then relieved of his vital parts. Hackett, Strafford’s senior in the Gardai, Commissioner Phelan, and McQuaid, the local Archbishop, have already made sure that the death is reported as accidental, with no unseemly details to throw any shadow on the respectability of the church, but Strafford is curious to know the truth.

There is no sign of any break-in at the house so Strafford naturally turns to the family: Colonel Osbourne, his pale and feeble wife referred to as the ‘white mouse’, son Dominic and Lettie, a precocious 18-year-old. As he talks to them in turn, he increasingly forms the impression of having walked onto a stage set, with a series of performances being delivered for his entertainment.

Strafford finds this theatrical screen difficult to penetrate, and the motivation behind what was clearly a passionate crime remains elusive. When his young assistant, Jenkins, disappears, he fears the worst. A local constable organises a search party, and from his discussion about his personal circumstances Stafford begins to see a pattern in events.

The author allows the reader’s understanding to run ahead of the protagonist's through a chapter voiced by the dead man in which he relates his time at the Carricklea Reformatory and Industrial School. Full of self-justification and delusion, this is one of the most chilling passages you are likely to come across in a work of fiction, all the more so for the knowledge that institutions such as the one depicted here really did exist.

Strafford makes an engaging character around which to build the story. His doubts and loneliness, and sensitivity to atmosphere, suggest he is a lightweight and for a long time it seems he is being manipulated. As we come to know him better it becomes clear that he is capable of careful calculation, and that he has the courage of his convictions.

The final chapter is also interesting. After another death, matters at Ballyglass House are left for the reader to imagine and the story jumps ahead ten years to a meeting between Strafford and one of the principals, at which past events are discussed, and some key details emerge. This is a subtle and well-written police procedural with a most powerful evocation of atmosphere.