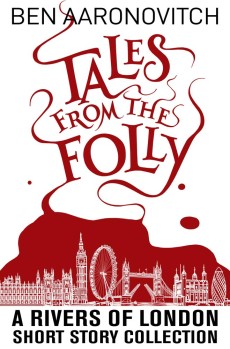 Tales from the Folly

A collection of short stories and shorter snippets set in the expanded universe of the Folly, home to London’s smallest and most specialist branch of the Metropolitan police.

The Rivers of London series by Ben Aaronovitch is one of the UK’s most popular urban fantasy crime series, starring mixed-race London copper Peter Grant and his urbane boss DCI Thomas Nightingale. Peter was originally slated for very boring desk job in the Met due to his habit of being easily distracted from routine policing but a chance encounter with a ghost changed all that.

The series of eight full length novels, three novellas and eight graphic novels has now been supplemented by a new collection, bringing together all the short stories set in Aaronovitch’s ever-expanding universe populated by rivers gods and goddesses, ghosts, vampires, magical practitioners and the fae, in all their impressive diversity. Many of these stories have been previously published in special limited hardback editions for Waterstones and the Australian market that many readers, like myself, might have missed.

Tales From the Folly packs far more of a punch than its size might indicate as each story has a brief author’s introduction and a note saying where it fits into the series making it easy for both committed fans and newcomers to follow the timeline. There are six Peter Grant stories and seven others, some little more than revealing, often intimate snapshots, but even these short moments, as they’re styled, all have something to say that’s worth knowing.

In the Peter Grant short stories there’s an interesting encounter during the 2012 Olympics that harks back to an incident during the 1948 London Games in which Nightingale very politely warned off some French magical practitioners, who’d arrived with strictly unsporting intentions. Even though Peter’s suave boss is off-stage for this story, his presence still looms large, and it was interesting to gain an insight into magic on the other side of the channel.

In other stories Peter comes up against spectral domestic violence; has problems with a pronounced – and rather miffed – sense of place in a bookshop (a branch of Waterstones, naturally); meets an elderly woman who has no intention of going to live with her relatives; struggles with strange goings-on in a library; and encounters a man who thinks he’s a rat.  Peter didn’t think he’d be involved in anything like this when he joined the police, but then he hadn’t expected to end up as an apprentice magic practitioner to a man born around 120 years ago who is now aging backwards.

Series favourites such as Peter’s sassy young friend Abigail Kamara make an appearance, and there’s also a story set in Germany in the world of the novella The October Man, where the reader is privileged to be present at the birth of a river god (not a sentence I often get to use in a review!). One of the brief ‘moments’ is set in 1966 and provides a telling insight into Nightingale’s reason for remaining at the Folly, explaining why he has defied the ghosts of his past to stay there and naming the person he’s not prepared to abandon.

For any devotee of the Met’s smallest specialist policing unit and the magical world that Aaronovitch has built with such success, Tales From the Folly is an essential addition to the bookshelf and will amply repay a close reading in search of interesting snippets while you revel in the longer stories. This is certainly one world I can’t get enough of.