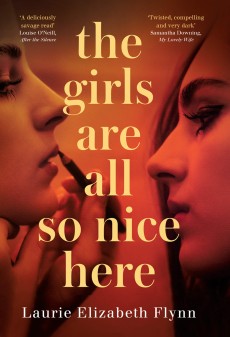 The Girls Are All So Nice Here

The game that ended so badly for one of the girls at Wesleyan college ten years ago is still not over for Ambrosia.

Then: Ambrosia knows from day one that she doesn’t fit in at the notable Wesleyan college. The bright and beautiful girls around her - naturally elegant, poised, wealthy and intelligent – make her feel like trash.
Worse, those girls clearly think so too. Snide remarks, backs turned, fake smiles, and no invitations, drive Ambrosia, who’s desperate to be someone she isn’t, towards the magnetic Sully. She is the epitome of the fun-time girl, and soon becomes Ambrosia’s best friend and also her toxic obsession, one that will destroy her as she drowns in Sully’s manipulations.

Now: Ambrosia has received an invitation to the ten-year reunion at Wesleyan. She is adamant she will not go. She will not go back and revisit those last days when any vestiges of goodness and her sanity finally capitulated to Sully’s scheming. But Adrian, her husband, finds out about the reunion, and reluctantly, Ambrosia gives in. If nothing else, she will find out who is sending her those pointed messages.

But Ambrosia has made her biggest mistake because reunions are never a good thing. All that drink, all those bad memories, all those fake smiles, all those people out for revenge …

This book flips easily and cleverly between then (2007) and now (2017), teasing the whys and wherefores of the backstory out. It is written almost entirely from Ambrosia’s point of view, the past in the past tense and the present in the present tense. There is a reasonable balance between introspection, dialogue, and action. Description is focussed on the sort of things teenage girls pay attention to, so the milieu remains far in the background and has no character.

At its heart, this is another story about mean girls desperately trying to shed the skin of their sordid past. The writing style, language choice and story line hint at the solid roots the author has already put down in books for young adults.

Although the sort of crime that mean girls are guilty of is predictable, this was in many ways more fun than a book focussing on serial killers. And this one certainly had its fair share of twists and red herrings, making concentration easy, proving you don’t mind an extremely long immersion in drugs, alcohol, profanities told from the point of view of an utterly vile character.

The Ambrosia (Amb) of college days is a weak, nasty liar, heading towards being the ultimate bully. She is as parasitic as Sully, who clearly is obsessively possessive about Amb. They slam their way through the first term, bouncing from one party to another, playing with the boys’ hormones, becoming increasingly symbiotic in their nature.
Today’s Ambrosia is still a liar. Mostly to her husband, who although portrayed as Mr Nice Guy, is little more than a shadow on the page, with a decidedly underdeveloped character.

Apart from Flora, who is candy-floss sweet, the other girls (and boys) are annoyingly indistinguishable, and their names are so generic that often I couldn’t think who I was reading about.

I couldn’t connect with any of the characters, but this is one of those rare occasions where the storyline was intriguing enough to keep me turning the pages. This is fun escapism from an author I will happily follow.