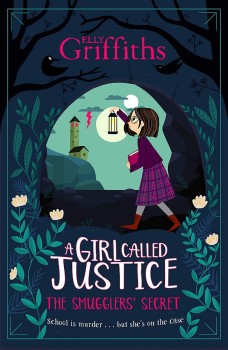 When Justice Jones takes part in a new school initiative to involve pupils with the local community, she doesn’t expect to end up with a suspicious death to solve. But then Justice attracts mysteries the way flowers attract bees.

Young sleuth Justice Jones, daughter of the well-known QC Herbert Jones, returns for the spring term at Highbury House Boarding School for the Daughters of Gentlefolk and is quickly on the hunt for a new mystery.

In a new initiative to instil a sense of social responsibility into the privileged pupils, they are all assigned jobs to do in the nearby village, helping people with a variety of tasks, not all of which are to their liking. Justice is sent to see Mr Arthur, who lives at the picturesque but ever so slightly sinister Smuggler’s Lodge, an old house by the sea. Mr Arthur is blind, and it’s Justice’s job to read the newspaper to him.

Justice is soon caught up in the search for her new friend’s estranged daughter who he hasn’t seen for many years, but believes may now at Highbury House. Then when events take a decidedly sinister turn, Justice is sure she now has a murder to solve, as well as a mystery. Oh, and there’s something odd about the new matron, as well. Life at Highbury House is never simple, especially when Justice Jones is around.

I’ve always loved boarding school mysteries and Elly Griffiths’ crime stories for younger readers are a great addition to the genre. I devoured Enid Blyton’s adventure and mystery books as a kid and if Justice Jones had been around then, she would definitely have been right up my street. The fact that I still feel that way now probably says a lot about the enduring appeal of this kind of story, although the Five Find Outers (and dog) never had to contend with anything quite as gritty as an actual murder.

Justice is a great character, demonstrating plenty of what used to be described as ‘pluck’ and although not naturally sporty in the usual boarding school tradition, she does get the chance to demonstrate an unexpected talent for cross-country running, using all her dogged determination to succeed, winning a newfound respect from her classmates.

The mystery is cleverly constructed and moves at a good pace, much like Justice trotting around the woods at Highbury House. Griffiths has effortlessly made the transition from adult crime to a much lower age group without any awkwardness or missteps. The denouement is suitably exciting, and anything involving smugglers’ secret passages always gets my vote!